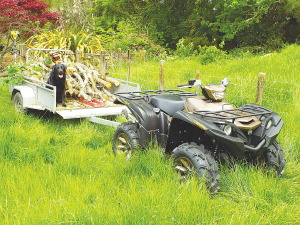 So it was great to throw a leg over the range topper from Yamaha, the Grizzly 700 Special Edition, which builds on the success of the standard model with a number of ‘sporty’ refinements.

Featuring the well proven single cylinder 686cc engine, mated to Yamaha’s Ultramatic transmission, it would be fair to say that this combination never feels short of grunt, is prompt off the mark and quickly hits maximum velocity. Indeed, during an afternoon’s logging, when an 8x5 trailer was loaded just a little too ambitiously and the route to the woodshed included a steep slope, the SE might have scratched for grip, but it never looked like failing.

Momentum was maintained by selecting 4WD at the handlebar button, then using the same system to choose limited slip or fully locked diff; in this case the former sufficed. On the return trip, this time with slightly smaller load in mind, the transmission took care of engine braking going back down the slope, using the integral sprag clutch to keep things under control.

A choice of ratios includes high, low, neutral, reverse and park, all easily selected by lever to the left of the 18-litre fuel tank. For those looking to do a little work, steel front and rear racks offer 50kg and 90kg capacities respectively, while the towbar, featuring a standard 2-inch receiver, offers a 590kg rating.

Fitted with 14-inch alloys and shod with 27-inch Maxxis Zilla mud tyres, the SE travels well on all types of terrain, although this tester thinks that a little less air in the tyres may have helped them clean a little better. Although sitting a little higher than the standard models, the SE was extremely comfortable, with the long travel suspension soaking up the bumps, making the most of its 193mm and 231mm suspension travel at the front and rear respectively. Add to that, easily adjusted 5-way preload settings, then the machine can be tweaked to individual tastes.

Heading out onto rougher country, the underside of the machine is protected by heavy-duty plastic skid plates with recessed fittings to stop the machine hooking up in hidden objects.  Pointing things in the right direction is made easy with a speed sensitive electric power steering system, while bringing things to a safe and controlled stop is made easy with disc brakes on all wheels.

Ample storage is delivered by three dedicated compartments, while information is relayed to the operator via a centrally mounted LCD display that monitors all key functions. A 12v power socket keeps the mobile device charged during the day and a high output headlight/work-light does the job on early or late shifts. Meanwhile, for those looking to tackle particularly gnarly stuff, the machine is pre-wired to take an optional Warn 2500 winch set-up.

All in all, a great workhorse: with plenty of power, plenty of grip and importantly, plenty of control.

Yamaha is made up of two separate companies - Yamaha Corporation, famed for musical and electronic products, and the Yamaha Motor Company, which started producing motorcycles in 1954.

The increasingly popular UTV/side-by-side sector offers a wide range of choices for farm or rural mobility, which has been made even broader with a new machine from Yamaha.

Kodiak built for the tough stuff

While the stranglehold of ATV’s on the off-road market has been tempered by the arrival of side by sides or UTV’s, the sector is still strong, particularly on narrow tracks or areas of difficult terrain.

Blurring the boundaries between work and play

New from the Yamaha camp is R Max2 XT-R.