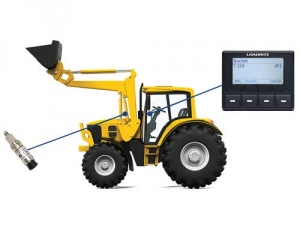 Trimble Loadrite system is based around a hydraulic transducer built into the lift ram and it converts the differences in hydraulic pressure to screen (above).

This season of belt tightening demands a close eye on production costs, whether stock are fed grass only, or supplements to keep production up and revenue rising.

Farmers feeding total mixed rations (TMR) are likely to have load cells on their mixer wagons, but those using traditional feeder wagons might look at a weigh system from Loadrite (Trimble Group) which fits to a frontloader, telehandler or skid steer unit. This closely measures feed quantities -- be they over or under target amounts. It might also be useful if materials are being sold off the farm.

The systems are based around a hydraulic transducer built into the loader lift ram circuit that converts differences in hydraulic pressure to an electrical signal displayed as a calibrated weight on the in-cab screen. Claimed accuracy is +/-1% when correctly calibrated.

The system can be fitted to up to nine different attachments, such as buckets, fork/grabs and pallet tines, and because the centre of mass is different with each, the system needs a quick, one-off calibration for each, which is stored in the control box. In use once an attachment is changed, the operator goes to the display and selects the correct item before weighing commences.

In practice the S1100 system uses a single sensor, and is used statically, which means to do a weight check the operator lifts the loader until arrows line up with a marker, then hits the ‘weigh” button on the cab display. This removes from the calculation any differences in hydraulic forces resulting from lift height and geometry.

An alternative option is the TS 1128 system which uses twin sensors and can be used dynamically or on the move for faster operation. It also has overload warnings, load counters and recall and subtract functions, plus the option of a printout if required.

Both units are easy to retro-fit to existing set-ups in around three hours. The gear is robust and weatherproof so it can be fitted to any ROPS loader tractors

JCB has given fans a glimpse of its new-spec agricultural Loadall at the recent LAMMA UK show.

Loader extra compact even with a cab

JCB agriculture has added a new compact, articulated wheeled loader to its range, useful in confined spaces on chicken, pig or dairy farms, and in nurseries and equestrian centres.

Game-changing loader has miles to go yet!

Thirty nine years is a long time since JCB launched the first Loadall telehandler in 1977.