Game-changing loader has miles to go yet! 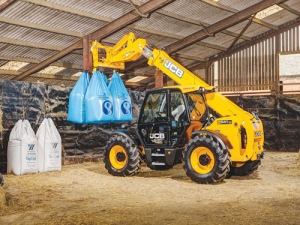 Thirty nine years is a long time since JCB launched the first Loadall telehandler in 1977.

Now the name is generic to this type of machine, invaluable on construction sites and farms worldwide.

In 1977 the first JCB 520 (the Loadall name wasn't used until 1982) had two wheel drive and a telescopic boom that lifted 2.25 tonnes to 6.4m height. It offered more reach and capacity than the traditional rough terrain handler of the day and typically featured vertical mast design.

In agriculture the machine revolutionised productivity by stacking bales, loading muck and shovelling grain, amongst many other tasks, with performance that showed up traditional tractor/loader combinations as lacking.

In that first year only 300 machines were produced by a handful of people, whereas today many thousands are produced annually by 800 staff.

Today, the Loadall comes in 90 models – 88 built at the world headquarters in the UK for global markets and two built in India for domestic supply. That range now includes models that can lift to 20m and weights up to 6 tonnes.

Repositioning the engine to side-mounting resulted in the boom being lowered and better visibility. It also includes improvements to the drivelines with a torque lock system that improved climbing ability and increased road speeds.

And for the future? As you would expect, JCB won't be sleeping on its laurels. Models denoted Dualtech VT will combine in one machine the traditional powershift transmission with a hydrostatic drive, giving better control in certain conditions and potential for greater productivity.