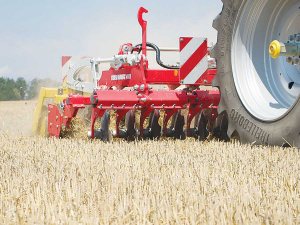 The Pöttinger Terradisc compact disc harrow lends itself to a wide range of applications throughout the arable season.

It is said to be a versatile machine, whether incorporating cover crops in spring, stubble cultivation in summer and seedbed preparation in autumn.

Available with working widths between 3 and 10 metres, the key design feature is a twin arm system that has twin disc carriers and a wide clamping bracket.

This has the effect of holding the 580mm discs at a precise, stable angle, that in turn means the soil profile is moved effectively. The set up also prevents lateral movement making the machine very effective in heavy soils or dry conditions.

The disc carriers are manufactured from high strength cast iron, creating resistance to stress and a long service life, while rubber elements act as overload protection and allow an upward movement is hidden objects are encountered.

Said to be able to deal with high volumes of organic matter thanks to a large under- frame clearance and the aggressive angle of the discs, Terradisc creates an homogeneous mixing of soil and plant residues at working depths of 5 to 15 cm, regulated by springs clips at the front of the machine.

The Pöttinger Terradisc compact disc harrow lends itself to a wide range of applications throughout the arable season.

Pottinger is launching a 3.0 m version of its cross-flow auger.

Keeping it short and sharp

When harvesting grass silage, farmers and contractors strive to get the highest possible forage quality to increase profits.