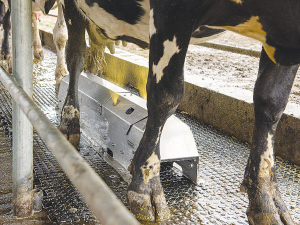 The newly launched Waikato Milking Systems Walkover Sprayer is designed for use in herringbone and parallel dairies to apply teat spray accurately during entry or exit.

For large dairies or those with limited exit yard space, two Walkover systems can be installed - one for each row of the exit area.

Waikato Milking notes that by installing the system close to the exit point, cows are sprayed immediately after milking, with little or no disruption to cow flow, alongside a reduction in contamination from splashing in the holding yard.

Manufactured with extensive use of stainless steel - said to deliver reliability, longevity and performance - the system uses optical sensors to automatically deploy two or four spray nozzles, based on the speed of the animal passing overhead. An automated wash cycle keeps the sensors and spray nozzles clean, while an optional 'purge' system using clean water reduces problems with teat spray build-up and dirt build-up.

Animals tread on tough rubber matting to encourage forward movement, receiving a programmable dose of 30 to 50ml of teat spray.

The manufacturers says the system also offers the benefit of removing the risk of chemical exposure to staff who might have allergies, particularly those chemicals that might contain iodine.

Compatible with most commonly available teat sprays, the system requires a 110 or 240V power supply that in turn is "stepped" down to 24 Volt DC at the unit. A compressed air feed, delivered by an 8mm line, is required at 90 psi, with consumption of around 2.5 litres/minute.

Machinery dealers around the country have reported a substantial increase in sales of both tractors and farm equipment compared with the same time last year.

A new generation of milking robots is promising greater profitability for farmers.