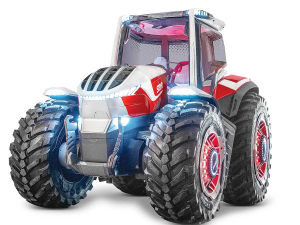 Among the eye-catching exhibits for those into ‘heavy metal’ was the stunning Steyr concept tractor.

Steyr tractors, products of CNH Industrial, are sold, particularly in the northern hemisphere, as the group’s premium offering alongside better-known New Holland and Case IH machines.

The concept tractor has a diesel-electric hybrid drive train -- a 4-cylinder 150kW/204hp FPT engine mated to an electric generator. The generator powers four independent electric wheel motors and a fifth motor that drives the PTO system.

The tractor, said to deliver 250kW at peak, also has a battery system with a capacity of 30kWH or 60kWH.

With an eye on the future, the tractor is also set up to power the electrically driven implements starting to appear in the market, via 48V or 700V connections.

The tractor can also communicate in real time with a drone to gather and process field data.

As part of the driveline, regenerative energy recovery stores power in the battery during braking or when travelling downhill.

Neat design touches include doors that open and steps that swing out electrically, and the driver’s seat swings through 90 degrees to greet the operator as he climbs into the cabin.