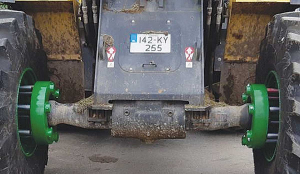 Developed by Samco Manufacturing in Limerick, the aptly named Wheeled Loader Extender is a retrofit hub system that allows loader operators to undertake road work at the factory set wheel track, then extend the loaders front wheels for work on the stack.

The wheels are “pushed” out using an integral, manually operated hydraulic pump, typically increasing overall track widths by up to 600mm

The system is said to remove the need for dual wheel set-ups and the chore of removing them for road transport. The modified track is also said to help improve consolidation on the stack, as it creates an offset between the front and rear wheels. Additionally, for those operating in walled stacks or clamps the extended track allows consolidation right up to the wall, while the body of the machine is kept further away.

Samco founder Sam Shine, a well-known face at the New Zealand National Fieldays says, “we originally designed the system for loaders, be we are currently receiving enquiries from people operating headers or large trailed implements on slopes and looking for improved stability.”

A new mower from Irish manufacturer Malone will be of interest as a no-nonsense, heavy duty machine for use in hay or silage production.

Grass silage begins to break down once exposed to air, making steps to reduce losses crucial.