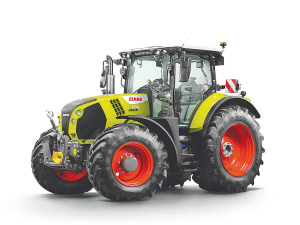 Claas has improved its popular Arion 600/500 tractors to coincide with the introduction of Stage V engines.

While power outputs remain unchanged, the new engines have a 6% to 14% improvement in the torque curve at lower revs, and a reduced engine idling speed to 650rpm in the Arion 600 models saves fuel.

CIS uses mechanical spool valves, while the CIS+ has electronic spool valves. Both systems have the CIS terminal and a multi-function armrest with a four-way control lever.

The CIS+ is aimed at customers who want greater convenience and efficiency but do not need all the functionality of the CEBIS system. It also provides the option of using the CMATIC continuously variable transmission without the CEBIS system.

Operators of CEBIS specification tractors will benefit from several new features including the CEBIS touchscreen terminal that has a new ISOBUS UT interface that enables all tractor and implement functions to be managed using one terminal in most situations. Additionally, the ability to link up to two cameras to the CEBIS screen avoids the need for an additional screen in the cab.

ISOBUS sockets can be fitted to the front and rear of the tractor, and CEBIS spec tractors can link an engine speed memo button to an external PTO button.

CLAAS has released a new flagship for its Jaguar forage harvester, as well as announcing a host of improvements right across the 900/800 series.