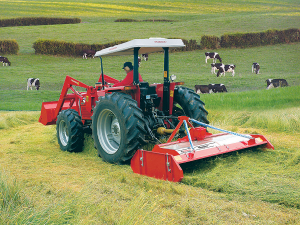 The Trimax Topper was developed on a Waikato dairy farm in 1993 and has become a mainstay for many operators.

With all these facets likely to prove advantageous to a farm’s bottom line, it’s obviously important to choose a machine that’s up to the job.

Trimax Mowing Systems is a New Zealand company that designs, manufactures, and distributes premium commercial mowing equipment around the world. Founded in the Bay of Plenty in 1981, the company recently celebrated 40 years of business at its headquarters in Tauranga.

Trimax suggests machine choice should be governed by the cleanliness of cut across the leaf, the dispersal of clippings and the ability to travel without scalping. They also say it is sensible to look at a wide range of cutting heights, allowing mowing and topping, ease of maintenance and good aftermarket support for parts and operational support.

Their topping solution, the Trimax Topper, was developed on a Waikato dairy farm in 1993 and has become a mainstay for many operators, offered as the 237 and 282 models, with working widths of 91 and 107 inches respectively.
At the heart of each machine, a 4-spindle layout and screw adjusted side skids offer adjustable cutting heights from 20 to 160mm, with typical outputs of 1.39 and 1.64 ha/hour at a typical 6km/h forward speed.

The four-rotor layout, combined with high spindle speeds, delivers a greater number of cuts per metre travelled, resulting in a finer cut and neater finish. This is also helped by the fitment of the company’s Lazerbladez, manufactured from heavy-duty spring steel and featuring a fling tip that is easier to fit and less expensive to maintain than typical full-width designs. They are also tilted forwards at an optimal angle to ensure better grass lift and rearward discharge.

The general layout has a short front-to-rear distance, allowing close coupling to the tractor and a high underbody clearance to make sure cut grass is cleanly ejected. An optional full width roller assembly can be fitted to eliminate scalping on uneven terrain. Weighing 620 and 640kg, the 237 and 282 machines require around 45 and 60hp and feature an industry leading three-year warranty.