Implement changeovers without any hassle 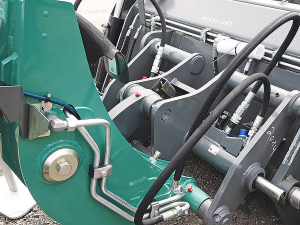 Kramer’s new ‘Smart Attach’ system avoids the need for the operator to leave the cab.

One of the greatest ‘pains’ when changing loader attachments, apart from having to climb down from the cab, is having to change hydraulic hoses that either can’t be undone or can’t be reattached because of residual hydraulic back pressure.

Whatever the problem, it’s usually something that tries an operator’s patience.

Specialised handler manufacturer Kramer, looks to have addressed the issue with its new ‘Smart Attach’ system that avoids the need for the operator to leave the cab. It uses a clever design detail – a hollow locking pin that is hydraulically inserted into the receptor coupling.

This means that auxiliary oil-flows, usually directed via traditional couplings, is now directed through the locking pins, doing away with the need for auxiliary hose couplings altogether.

While this is might appear to be a simple solution, attempts to do the same in the past have led to some problems; typically the high pressures needed for attachments has resulted in blown seals at the locking mechanism.

Kramer has overcome this issue with the help of electronics, which sense when the system has been engaged via a dashboard switch and automatically drops the system pressure from the standard operating pressure of 220 bar to only 25 bar.

This lower value is enough to activate the pins and locate them in the female sockets in the frame of the bucket or implement, before returning to the standard operating pressure when the system is deactivated.

To account for any wear in the hitch points, the locator pins have some ‘float’ built in, allowing them to locate securely, even if the frames on the bucket and on the loader fail to line up exactly.

The company claims that oil-flow remains unrestricted, with switching attachments done in seconds, rather than the minutes required when climbing out of the cab, twice, in a typical changeover. That alone should sell it to many.

While it is impractical to retrofit the system to existing machines, on the plus side, many existing buckets and attachments can be adapted to the system, and it is entirely compatible with all the Kramer-equipped quick hitch attachments that have been produced since 1963.

Only available on the 8 Series loaders at present, there are plans to extend the system across the complete range in due course.