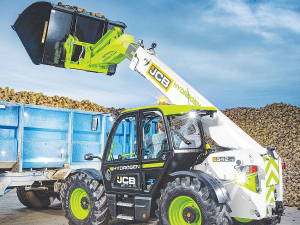 While the automobile industry heads full tilt down the electrification route, heavier industries such as trucking and construction appear to prefer a hydrogen-fuelled future.

JCB notes the “green machine” – as well as ditching the more normal JCB yellow for a lime green similar to a competitor – does everything that would be asked of its diesel-powered equivalent, with the benefits of zero emissions and a lot less noise.

Developed by engineers at the JCB engine factory in Derbyshire, the reengineered 4.8-litre (94hp/75kW) four-pot block is said to be far less complicated than a hydrogen-powered fuel cell and lends itself to incorporation into all types of traditional powertrains.

The same 4.8-litre hydrogen block has also been installed in several other JCB machines, including a backhoe loader, with the fuel stored in a variety of locations – not always in the engine compartment – providing sufficient capacity for the machine to undertake a full day’s work.

Moving forwards, JCB is investing £100m on a project to produce what it calls “super-efficient hydrogen engines”, with a team of 100 engineers already working on the development, with another 50 being recruited. At this stage, the company is targeting late-2022 when the first hydrogen powered machines will be available for sale, incorporating a new block that is expected to cost roughly the same as a diesel equivalent.

Although this month's Consumer Electronics Show (CES) in Las Vegas is usually associated with the "geek brigade", global manufacturer John Deere chose it to launch new technology aimed at farmers and growers.

Contracting over a vast area from its Mangawhai base, Hilltop Harvesting’s beat covers Whangarei to the north, Silverdale to the south and everything in between.