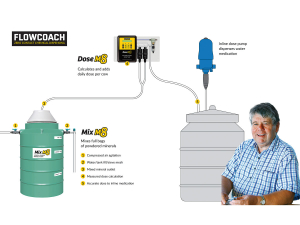 Local company Inflex International claims to have made the job of inline dispensing of water medication a whole lot easier.

Inflex chief executive Mark Bell Booth says that the current system can be a messy and time consuming on many New Zealand dairy farms.

He says a quick look into the dose tanks under inline water medication systems shows how the problem of undissolved minerals makes many dose mixing tanks look more like a “battle scene where expensive assets are constantly left behind each day, rather than being a fully integrated mixing system for daily dispensing of inline water medication”.

It has just released its two-part solution to solve the problem of poorly mixed dry mineral dosing into stock drinking water – under the Flowcoach Dose M8 and Flowcoach MixM8 brands.

“We have created a two-part solution to the problem,” he says.

“Mixing powders needed a back to basics first principles solution; you need a recipe, a proven method of mixing and a simple process anyone can easily follow.

“The reaction we have had from mineral suppliers in the market has been unanimous – it’s about time someone developed a solution.”

Bell Booth says MixM8’s recipe book is very straightforward. He advises to eliminate dust and mess by splitting the dry bagged minerals into two buckets before mixing anything. “The MixM8 tank connects to compressed air, water and the Dose M8 all within easy reach of the operator.”

Fill the MixM8 to the first water line mark then add the contents of the first bucket carefully onto the top of the water/mesh sieve.

Use the hose to wet down the dry minerals so they dissolve through the mesh sieve with the bubble agitator turned on.

Add more water to the 2nd fill mark then add the 2nd bucket to the mesh sieve and repeat the dissolving process.

Complete the ‘top up’ process by filling to the 200 litre mark, leave the bubble agitator on for 45 minutes to complete mixing, occasionally turning on the agitator during the week to stir in again any minerals that may have dropped out over the week.

That’s where the Dose M8 takes over: a medication control system that measures out and dispenses the correct volume of mineral mix from the MixM8 tank directly into the inline water medication storage tank under the dispenser each day.