Film binding balers prove their worth 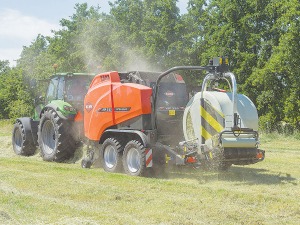 Owner Tony Ireland says there has been a reduction in damaged bales needing attention and customer complaints.

A switch to KUHN film binding is paying off for one South Waikato baling contractor, Ireland Contracting, who bought two FBP 3135 balers last spring, attracted to the KUHN FBP’s bale quality (shape and density) and reliability of the film binding system.

Producing around 20,000 bales each year, with 17,000 pushed out by the FPB duo in the last 9 months, the team wraps most bales with the 3D wrapping system, applying wrap more evenly across the bale and around the bale edges to prevent damage during cartage and handling.

Owner Tony Ireland says there has been a reduction in damaged bales needing attention and customer complaints with the change to the FBPs. He also notes that the film binding system is easier to load with the 750mm film rolls, rather than the heavier fullwidth rolls, and makes delivering plastic out to jobs easier with only one product to worry about.

The bales are operated behind Fendt tractors using their own in-cab ISOBUS terminals, and operators say the ISOBUS makes it easy for them to switch between tractors without the added complication of monitors and looms.

The Ireland Contracting team also like the rotor drive disengagement feature, making blockages easy to manage if the intake chokes and the chamber is nearly full. The system allows the operator to disengage the intake system, while maintaining the drive to the bale chamber, allowing the bale to be tied and ejected before re-engaging the intake and allowing the blockage to pass into the now empty chamber.

Independent tests comparing the systems have found film-on-film has less potential for the surface spoil that can often be found between layers of net. Despite initial customer scepticism, there is little cost difference, if any, between film-on-film and net and film, especially when bale quality is factored in. “The costs are comparable, if not slightly cheaper than net film,” KUHN South Island sales manager Justin Williams says.

Williams notes that film binding is increasingly preferred over traditional net binding for silage bales as it provides tighter wrapped bales with better protection around the circumference. The additional oxygen barrier is also said to guarantee better silage quality, an easier bale to unwrap, even in frost and the removal of the need to separate net or film wraps for recycling.

Film and net binding are two separate systems on all KUHN baler-wrappers, enabling the operator to carry both film and net at the same time. Switching between the two is quick and easy as there is no need to change rolls and no tools are required.