Dutch drill makes it easier to grow grass under maize 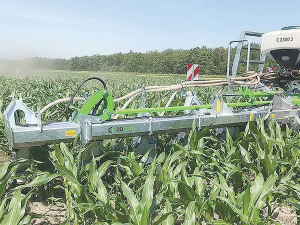 A Dutch-built drill for establishing catch crops is said to offer a quicker and more effective method of establishing grass under maize.

The drill is gaining momentum in the UK and is likely to find favour with forward-thinking growers in New Zealand.

The Zocon Greenseeder was released following the introduction of regulations in the Netherlands that makes it mandatory to establish a green cover crop by October 1st and forbids leaving harvested maize ground bare over the winter period.

In the UK, water authorities are taking notice of the environmental impact of growing maize, for either forage or feeding anaerobic digestion plants, particularly in nitrate leaching. Several are now offering financial support to reduce problems, while some dairy companies are beginning to stipulate green cover as part of their farm assurance schemes.

The GreenSeeder features a linkage mounted, galvanised steel frame that offers 850mm of ground clearance, meaning grass can be sown later in the season, so extending the working window. A rigid main beam is fitted with hinged arms that in turn carry the soil engaging elements. At the headland, a hydraulic lift system for the trailing tine harrows lifts them into the air to prevent crop damage. This “high-lift” system allows the use of the machine in taller crops, with operating speeds of up to 12 km/h.

Working height is controlled by four support wheels, while the seed is distributed through feeder pipes onto spreader plates that offer a full spread up to the base of the maize plants. Harrow tines measuring 10mm, with five pressure settings, ensure good seed to soil contact.

Apart from Covid-19, there seems to be one topic that is dominating the farming media at the moment – freshwater and all the new rules and policies designed to protect it.

Getting ready for planting

It's that time of year again — planning for maize.

Waikato owner-operated farmers Nacre and Anthony Maiden says the “stars aligned” this year to give them a particularly bumper maize crop despite the drought and their sandy loam soils.