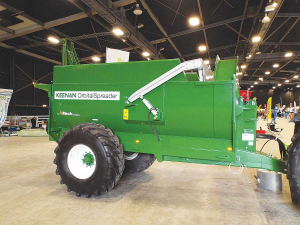 However, the problem of repeated applications to the same area is, in many cases, causing problems with high levels of potassium. Additionally, the move by some forward-thinking farmers to feedpads is resulting in the need to deal with some drier manures.

A rear mounted pushing door delivers the material to a large flywheel mounted at the front of the machine. That flywheel, a solid 1.8m diameter disc, carries six paddles and rotates at 170 rpm.

In operation, the material hitting the flywheel and the paddles is shredded then passes out for spreading through a side opening. It will spread material -- depending on its makeup -- up to 20m.

During loading and transportation, a hydraulically actuated slurry door seperates the chamber and flywheel, allowing the machine to handle both liquid and drier manures and ensuring low start-up torque.

The machine has only four key moving parts and is solidly built, so Keenan claims excellent reliability and low maintenance costs. The set-up also benefits from one main drive chain and all bearings being located outside of the main body of the spreader.

A variable rate control system for the rear door/pusher arm allows precise adjustment of material arriving at the rotor, to achieve typical spreading times of 1.5 to 5 minutes per load.

Additionally, as the load moves forward, weight is transferred to the tractor’s rear axle, for positive traction in poor ground conditions.

The Orbital has a tare weight of 5.5 tonnes and a minimum power requirement of 120hp.