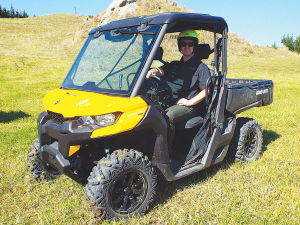 BRP announces five-year plan to offer electric models in each of its product lines.

BRP, maker of the well-known Can Am brand of UTVs, has announced a five-year plan that will see the company offering electric models in each of its product lines by the end of 2026.

After developing and evaluating several concepts, BRP has made the decision to develop its Rotax modular electric powerpack technology, which will be incorporated in all its product lines to give customers an electric option.

The plan includes expanding its Rotax electric power unit development infrastructure in Gunskirchen, Austria and creating the Electric Vehicle Development Centrem at the home base of Valcourt, Quebec, Canada. This facility will feature state-of-the-art equipment, including several sophisticated test benches and dynamometers, plus an ultramodern robotised manufacturing cell for electric batteries.

In early 2019, BRP acquired assets of Alta Motors, an electric motorcycle manufacturer, is currently expanding its R&D team and developing electrcidrivelines with the involvement of engineers and specialists in Quebec, Austria, Finland and the United States.

"We have always known that electrification was not a question of if but a question of when," said José Boisjoli, President and chief executive officer as he released the new five-year plan.

"Today, we're very excited to unveil more details of our plan to deliver market-shaping products that will enhance the consumer experience by offering new electric options," he added.