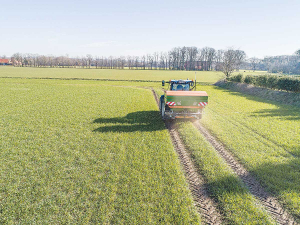 Cultivation, seeding and fertiliser application specialist Amazone claims its new AutoTS spreading system can increase yields along the borders of the paddock by up to 17%.

The proven disc-integrated system uses shortened blades for more accurate, flexible spreading along borders, allowing settings to be adjusted to a specific spreading situation, such as a crop edge, boundary or water course, from the tractor cab.

CLAAS Harvest Centre product specialist - Amazone, Steve Gorman, says "for example, if a paddock borders onto land with a similar crop, 100 per cent of the application rate can be spread right up to the edge of the field using the side spreading function. If the paddock borders a road or public footpath, the boundary spreading function reduces the maximum throwing distance and prevents fertiliser from being thrown across the border."

Comparing calcium ammonium nitrate being spread at 24 metres, over three separate passes, the average yield of the five-metre border treated using a conventional border spreading system was only 68% of the main body of the paddock. This increased to 85% when using the Amazone AutoTs system.

Gorman says this improvement can really add up in small or irregular-shaped fields because they have a higher proportion of border area.

The value generated by the AutoTS system, compared to conventional border spreading systems, can be estimated using an Amazone's online calculator at www.amazone.net/border-spreading-calculator.