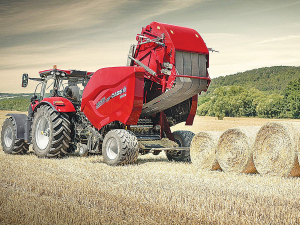 In May, Case IH released details of upgrades to the RB344, variable chamber baler and has now indicated multiple redesigns to the high-end RB456 and 466 HD-Pro models.

Designed to make high density bales in crops, including dry straw or wet silage, the company reports an extensive development and pre-production phase that saw machines producing more than 150,000 bales.

Aimed at farmers or contractors who make 10,000 bales a year or more, much of the development has centred around ensuring reliability and consistent bale shape. In the case of the former, machines have been fitted with heavy-duty components and fewer moving parts. Engineers have also enlarged and strengthened rolls, shafts and the rear door assembly, while also introducing a heavier duty gearbox and driveline.

Up front, an extra-wide diameter rotor is said to help prevent blockages, while a newly introduced, active drop floor means blockages can be cleared quickly. The bale chamber has also been redesigned to incorporate a revised belt path, said to deliver well-formed, dense bales that will stack efficiently.

Each model offers a choice of three rotor options, including a basic feeding rotor, 13 or 25 knife chopping rotors. Bale size, number of net wraps and density can be easily set on the in-cab control panel.