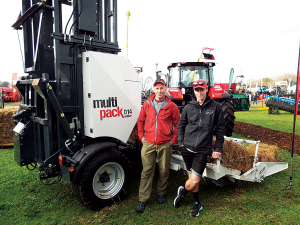 Ian and Megan Lockwood, trading as IJ and MA Lockwood, operate a unique contracting business over a 20km radius from their Hunua, South Auckland base.

Having been down the traditional share-milking route, they set up a business in 2017, to concentrate on producing high quality hay in small bale format, servicing the horse breeding rearing and feed supply outlets in the Auckland area.

During the 2020 season the business produced around 41,500 bales, using a pair of MF1840 in-line balers, of which around 12,000 bales are stored in barns at the home premises at any one time, for autumn/winter supply.

Like many areas of agriculture, the operation relied heavily on labour, over the years becoming a real problem trying to attract workers to handle bales as production increased. Ian says, “we know that the work was hard and physical, but we got to a point when we couldn’t be sure workers would turn up, as we weren’t even get responses to job advertisements, so we had to do something about it.”

‘Doing something about it’ resulted in the arrival of a European- built, Arcusin Multi-Pack D14 Bale Packer that, since landing at the property, has gone on to revolutionise the business, helping shift around 15,000 bales during the second part of the season.

During that time, it doubled the businesses’ daily output, resulting in 450 bales per hour being packed, transported and stacked in the storage barns.

As Ian points out, “we work hard to cut hay at the right growth stage, get it dried and baled in peak condition, but getting it off the paddock was our weak link. We can now get it moved and stored safely and quickly, before the arrival of any rain, which is a huge bonus for us.”

Looking at the D14 in more detail, a substantial chassis incorporates collection, conveying and stacking elements, controlled by the machine’s own on-board hydraulic system.

Comfortably pulled with a 100hp tractor, the right-side bale chute with flexible guide bars bring the bale into the machine, using an exclusive chain collector that turns the bale 90 degrees before entering the stacking module.

Here, pairs on bales are lifted to create to 4, 5, 6 or 7 layers to create 8, 10, 12 or 14 bale packages. Designed to be used in fully automated or manual mode, after each block of bales is assembled, a Rasspe knotter system wraps three or four HD twines around each pack, before lowering the bundle gently back to the ground. Weighing in at around 2900kg and operating with a 2100mm wheel width, Lockwood reports that the machine is very stable on all types of terrain, particularly on the hills or sidling land that is common in the area.

With the Lockwood operation, bale packs are handled using an Avant compact handler, supplied by the couples’ son Kyle – who runs a separate contracting operation – moving eight packs (112 bales) at a time by trailer for loading into the barn.

During the closed season, bale packs are removed from the barn and loaded on pallets and delivered to customers, who can handle each pack quickly with a fork-lift, loader or break them down into individual bales.

Describing the significant investment as being very successful, Ian Lockwood comments, “the Arcusin has effectively doubled our daily outputs, by which I mean, we have twice as much high-quality hay stored in the shed at the end of each day. The machine has been faultless, just requiring some routine greasing and replenishment of the twine. Indeed, it has given us so much confidence in terms of output that in the future we are also considering baleage as part of our offering”.