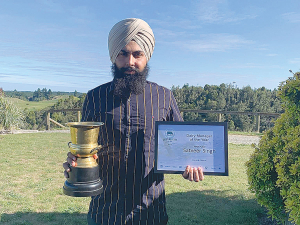 Central Plateau Dairy Manager of the Year, Satveer Singh, comes from a farming background in India, where his father is an organic farmer with Sahiwal cows.

Satveer gained a Diploma in Agribusiness in 2016 and began work as a farm assistant in Taupō. He moved to the current farm in 2017 and his career has progressed through the seasons to Farm Manager. He works on Rob Stantiall's Tokoroa 255ha property, milking 700 cows. He won $8,825 in prizes and three merit awards.

"I entered the Awards last year and gained a good understanding of where I stand in farming," he says.

"There was a lot of feedback and I could focus on things that needed to be done."

During challenging times on-farm, Satveer plans the tasks that need to be done that day and remains motivated by focusing on his future farming goals, which include herd ownership and breeding.

"I have the plan chart on my bedroom wall and I see it every morning. I have written what I will achieve in the next coming year."

Satveer identifies his work ethic and discipline as a strength of the business.

"I am dedicated towards achieving my goals and career progression."

The 28-year-old began dairy farming in New Zealand in 2012 and has been on the current property since 2015, working his way up to farm manager.

Marara enjoys the variety of work on-farm and the lifestyle that comes with farming and cites people management and his genuine care as a strength.

"There is excitement in learning something new.

"I'm also proud of my stock management and that our cows are so calm and relaxed."

Third place in the Dairy Manager category went to Gavin Humphrey who is farm manager on the Wairarapa Moana Inc 337ha Mangakino property, milking 1,90 cows. He won $2,020 in prizes.

Nothing to lose, much to gain

Bay of Plenty Share Farmer of the Year winners Scott and Becks O’Brien say farmers have nothing to lose and everything to gain in Dairy Industry Awards.

A former Auckland sales and marketing executive and a former adventure tourism guide and boutique lodge manager have won the 2022 Central Plateau Share Farmer of the Year title.