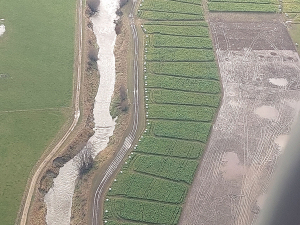 An aerial survey this month found most farmers well prepared for winter grazing this season.

DairyNZ's head consulting officer for the South Island says they are generally encouraged by the reports about way that Southland farmers are dealing with winter grazing.

Tony Finch says this is backed up by reports that few complaints from the public are being received about poor winter grazing management. He says there certainly needed to be a step up in farmers improving their management of winter grazing and this appears to be happening.

“It’s also been supported by Environment Southland and their flights over the region to see what has been happening,” he says.

“There have been three flights now and another one is being planned. From these flights, without a shadow of a doubt, farmers are making a difference now.”

Finch says a few unfortunate images of farmers not doing the right thing in respect of winter grazing do not give an accurate picture of what is actually happening in the region. He says the vast majority of farmers are responding incredibly well and are better prepared now than ever before.

Finch says farmers are taking the issue seriously and are investing heavily to make things work.

“But we know that some are challenged by the new rules and we want to know who they are so that we can help them. When we get a lot of heavy rain it is very hard to manage significant rainfall events and that means that if farmers have not been prepared they can get caught out,” he adds. “Our plan is to ensure we eliminate this going forward and move the bell curve further to very good management practice.”

Finch says DairyNZ is getting more feedback than before from farmers doing a good job telling them about others who are not performing well. He says they are also seeing a willingness on the part of good farmers to help others step up to the mark.

He would like to see more images of the good job farmers are doing to deal with winter grazing, rather than the few that are letting the side down.