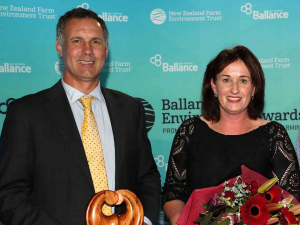 Last year, they took out the Supreme Award at the East Coast Ballance Farm Environment Awards.

The couple noted, at the time, with farmers being looked at from all angles, they wanted to be role models for other dairy farmers so they can also do what’s right for the animals and the land.

The Dawson’s farm, Glenelg is somewhat unusual for a dairy farm in that some of the land is hilly. But the couple have retired about 30ha of land at the back of the farm, fenced the waterways and have even set up a nutrient trap to stop run-off going into their neighbour’s farm.

They have also dropped cow numbers, but their production is still well ahead of district and national averages. Their heifers are on once-a-day milking all year round and, from Christmas, the whole herd moves to OAD.

Nick and Nicky Dawson have, from day one in their farming career, been committed to improving the environment on their property. From the first days in their sharemilking career they were buying root trainers and planting these strategically around the farm.

They have become, in every sense of the word, ‘model farmers’ having made what amounts to a lifetime commitment to best practice farming.

Fonterra chief executive Miles Hurrell congratulated the Dawsons for winning the award, and he also recognised the other finalists, Chris and Shelia Falconer and Michelle and Leighton Pye.

“These farmers are driving positive change in our industry and are great role models,” Hurrell says.

“As New Zealanders, farming is a big part of our way of life and agriculture is important to New Zealand’s success at home and abroad.

“What sets us apart is our pasture-based farms, our animal welfare practices, the ways we show care for our environment, our people, and our local communities.

“Nick and Nicky, along with the finalists, are great examples of this in action.”