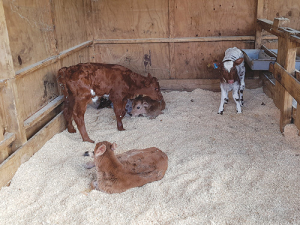 Heifers at the NZ Young Farmers-owned farm in Auckland.

The modern facility on the 74ha Auckland dairy farm has been used to feed grass silage to the dairy herd.

“It’s been a particularly wet winter on the farm,” said the chair of the Donald Pearson Farm board, Julie Pirie.

Calving started on July 10, early for such a wet farm.

“Ideally the planned start of calving should be between July 20 and July 25,” she says.

Earlier this month, 70 of the 120 Jersey and milking shorthorn cows had calved. Jerseys are a new addition to the herd, with 61 arriving on the property in late May.

The milkers were being fed meal through an in-shed feed system in the 11-aside herringbone shed.

“The meal is used to help stay on a long round until the grass starts growing,” says Pirie.

“We’ve just had some ammo [fertiliser] flown onto the paddocks by helicopter because it’s so wet. That happened a fortnight later than we had hoped because the helicopter has been so busy.”

Two new members have joined the Donald Pearson Farm board.

Stu Muir has replaced Tiaki Hunia and Sam Robinson will be the NZ Young Farmers board rep.

“Stu is a well-known Waikato dairy farmer who has excellent environmental stewardship credentials and a strong connection with iwi and young people,” says Pirie.  “Sam brings in a lot of governance experience to the board.”

Former chief executive Terry Copeland will continue serving on the board for the foreseeable future.

NZ Young Farmers members will get a chance to visit the farm for a planning session. The day is being organised by northern region Young Farmers.

“It will be an opportunity for a brainstorming session so we can be assured the board’s and members’ plans and vision for the farm align,” says Pirie.

The property will farmed while its future as an educational farm is mapped out.

The new chair of New Zealand Young Farmers Jessie Waite says her key focus over the 12-month tenure will be to continue the organisation’s growth.

New chair and board members for New Zealand Young Farmers

The AgriKidsNZ Grand Final is expected to be a hot competition, with 63 competitors all battling it out for the national title in Whangarei from the 7th to 8th July.

Mentors can make a huge difference