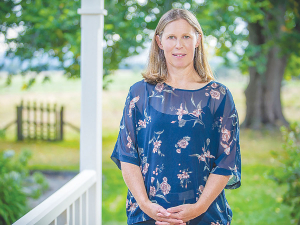 Susan Kilsby, ANZ, says overall milk supply is expected to be compromised up until the peak of the season due to unfavourable weather.

The weather is playing a role in the performance of the dairy industry this year, according to the ANZ Bank's latest Agri Focus report.

The report, compiled by ANZ agricultural economist Susan Kilsby, states that overall milk supply is expected to be compromised up until the peak of the season due to unfavourable weather.

The report says farmers, particularly those in western regions, have had persistent rainfall and cooler temperatures which has slowed pasture production, reduced cover levels and caused more pugging of pastures than usual. Dairy News recently reported exactly that happening on the West Coast of the South Island. The same situation has prevailed in the lower North Island.

The report says this has forced farmers to resort to using more supplementary feed to keep cows in good condition until the weather improves. Mating season is foremost in their minds, notes the report.

The ANZ report says all this means that milk production for August was down by 4.2% on last year when the weather was more favourable.

Again, the report says not too much can be read into the August figure given that production in this month is often variable. But since August, the poor weather has continued in western region, which may not bode well.

In regard to total-season milk production, Kilsby and her economic team is predicting that this will be down by one percent on last season. They say this is due to some dairy farms dropping out of the system and being converted to other uses such as horticulture, beef, dairy support and even lifestyle blocks.

It goes on to say that farmers appear to be easing back stocking rates and using less artificial fertiliser as the pressure comes on from new environmental reforms. It does say this will be partly offset by better cow genetics that will increase per cow production and the application of better farm management practices.

The report also says it seems it's becoming much harder to increase milk production. And its final prediction is that overall milk production is on the decline and will fall steadily over the next decade, making a one percent per annum fall in production highly probably.

On the market side, the ANZ report says international global markets are relatively stable at present with demand slightly subdued. It says dairy commodity prices have improved in the past few months and supply and demand appear to be relatively balanced.

On a positive note the report suggests if the markets remain in balance, prices shouldn't stray too far from current levels which it says bodes well for the milk price. That being the case, ANZ is forecasting the farm gate milk price to be $8.20/kgMS for the season.

The quantity of whole milk powder (WMP) traded on the GDT typically peaks near October, says the report, but this year this is likely to extend further out. Interestingly there has less been demand on the GDT from North Asian buyers - namely China - while demand from South East Asia has been better.

This leads onto the overall global economy and the report says the recovery is slowing. It singles out China, where it says economic growth rates are being revised down. There is also a comment in the report which says the NZ$ is likely to strengthen and that this will curb returns at the farm gate.

The overall tenor of the report could be interpreted as quietly optimistic. What it doesn't say much about is the potential for farm costs such as fertiliser, fuel and other essentials to rise due to rising freight costs, not to mention the potential for interest rates to also rise.

Overall the NZ economy has performed more strongly than anticipated, according to the ANZ Agri Focus Report.

An eye on costs is key

While the outlook for global food prices is positive for New Zealand primary producers, some challenges lurk in the year ahead.

A return to normal is still a long way off in terms of global shipping, according to a recent report by the ANZ Bank.