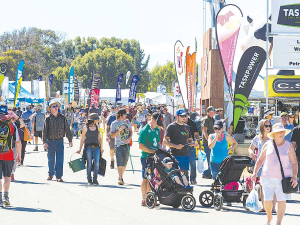 Feedback from tractor companies exhibiting at the field days has been positive. Organisers say the three-day event had very strong ticket sales.

With an enforced absence of two years, brought about by its cancellation in 2020, the Central District Field Days at Feilding heralded the first event of its type for 2021.

With everyone breathing a big sigh of relief, following the cancellation of the Northland Field Days and The Horse of the Year Show a couple of weeks earlier due to Covid, the CD event was certainly upbeat.

Visitors ranged from those looking for a bargain, to others doing some research for a future purchase, to those just after an excuse for a little socialising - with plenty of hand sanitiser, of course.

Exhibitors spoken to by Dairy News were very buoyant about the state of the industry, citing good weather, plentiful harvests and a healthy dairy payout for the season.

As expected, some were complaining about having to live a little hand to mouth with stock, due to the world's heavily disrupted shipping schedules. Indeed, one UTV importer noted astronomical increases in freight charges, citing a 40-foot container that cost around US$750 from China to Auckland in January 2020, now costing US$3500.

Kyle Baxter, Tractor and Machinery Association (TAMA) president and tractor and machinery lead at Norwood says feedback from sales teams has been very positive, with some saying that they had received serious enquiries from faces they hadn't seen in many years.

"Interestingly, we did see the crowds thin out a little mid-afternoon, obviously some going home to milk cows or others getting back to harvesting the maize crop that appears to be a couple of weeks behind the Waikato region."

Henry McLemrnon, sponsorship and events director at Stuff Events says early indications are that they've had the best ticket sales in recent years, from a predominantly trade day on Thursday through to family groups on Saturday.

"Exhibitors told us they had experienced strong revenue, some even said they sold more on the first day than they did across three days at other field days.

"They also said they recognised the advantage of a regional show, not only direct sales, but delivering good leads in their own region for follow up. So much so, that a significant number of exhibitors have re-booked for 2022, which will be the event's 29th year."

Central region aiming to be the Agrihub of NZ

Manawatu District Council Mayor, Helen Worboys says the district is very proud to host the Central Districts Field Days because the region sees itself as the agritech hub of NZ.

Good crowds are expected for the well-established 27th Central Districts field days being held at the Manfeild racetrack, at Feilding, from March 19 to 21.