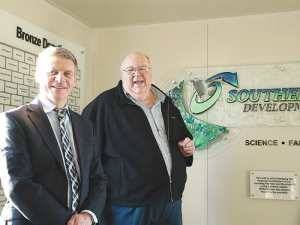 Calving has begun and a commemorative plaque was unveiled twice on an eventful official opening day, July 14.

A plane carrying Prime Minister Bill English was first weather-delayed in Wellington then diverted to Dunedin because Invercargill was fog-bound.

English eventually made it by car, unveiling the plaque about 3.30pm, by which time Environment Southland chairman Nicol Horrell had already stepped up to do the honours, joking about his promotion to PM.

About 300 dairy farmers and supporters had gathered to celebrate the opening of the 349ha farm near Makarewa, just north of Invercargill.

Southland and South Otago farmers and businesses invested $1.25 million in the hub through the Southern Dairy Development Trust, and principal shareholders DairyNZ and AgResearch invested $5 million each. Debt covered the rest of the $19.5 million project.

Conversion of the property began in November last year.

English congratulated the partners on the project’s rapid coming together.

“What I like is that the industry has done it itself, rather than waiting around for the Government to be too much a part of it -- apart from supplying some money -- and that it’s localised so you’re going to be dealing with things that matter to us, here.”

English said the hub will address the particular challenges facing farming in the south, with its “bit of a gap in the research footprint” particularly since Invermay’s contraction.

Southern Dairy Hub chair Maurice Hardie said the opening is an important milestone for the region and NZ.

“Research on the southern region’s climate and soil types will be invaluable. We’re excited that research is now underway to drive better farming practices, environmental initiatives and increased efficiency on farms.”

The first research is comparing the feed regimes of cows on fodder beet with those on kale. Another study will seek to validate DairyNZ’s Forage Value Index (FVI), a ranking system for ryegrass cultivars, by comparing the performance of high- and low FVI-ranked cultivars under realistic conditions. The pastures have been sown and measurements will begin in spring.

The hub’s business manager, Guy Michaels, said the farm is now up and running, with calving having started the weekend of the official opening.

The stock includes 100 R2 heifers and 340 mixed-age cows from the North Island, with early North Island calving dates. The rest of the 700 cows are due to start calving on August 8.

Michaels said Southland’s weather tends to be settled in winter so the early calving is not expected to be a problem, except for the need to be careful to avoid pugging because 80% of the farm went into new grass when it was converted.

DairyNZ chief executive Dr Tim Mackle missed the opening because of flight disruption but sent a message on Southland and Otago’s importance to dairying.

“DairyNZ is investing in the hub to help dairy farmers and communities identify the best options for profitable, competitive and sustainable dairying. The future is in fixing real challenges with real solutions, and that’s where the science at the Southern Dairy Hub is crucial.”

AgResearch chief executive Tom Richardson said the Hub will be part of a national network of high quality new science facilities supporting land-based industries. AgResearch is also investing in new joint facilities with partners at Lincoln and Palmerston North, and keeping a presence at its Invermay campus near Mosgiel.

“We looked at the map and saw a gap in our capability in the deep south, and the huge benefits that permanent, purpose-built research facilities in southern conditions could provide. Working alongside local farmers also makes good sense -- the scientists researching what is relevant to local needs.”

“With the challenge of growing the value of NZ’s agricultural exports, while preserving and enhancing the environments we farm in, there has never been a greater need to invest in quality science.

“That’s what we will see here at the Southern Dairy Hub and other new facilities.”

The Hub will next develop an agri-business centre for training, education and farmer events, and office spaces. A sponsor is being sought.

Turning back the clock

Landcorp became a state-owned enterprise in 1987 as part of the fourth Labour Government’s massive economic transformation.

Technology, not taxes, is the way to deal with water related issues.

Doing well for a small outfit

Prime Minister Bill English recently spoke at the NZ Institute of International Affairs annual dinner and touched on trade. Here are excerpts from his speech.

Prime Minister Bill English says in most regions Maori now have the potential to become the largest long-term investors.

The Government is now backing a Green Party bill requiring country of origin labelling (CoOL) on single ingredient food such as fruit and meat.