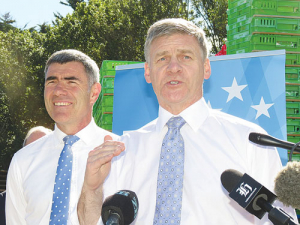 Technology, not taxes, is the way to deal with water related issues.

So said Prime Minister Bill English last week at a launch of the National Party’s agriculture policy at a large horticulture property in Horowhenua.

Woodhaven, a family business for 38 years, employs 205 local people. Water is a major issue for the business, especially for cleaning vegetables ready for freighting to markets in Wellington and other regions.

English, with local MP and Minister for Primary industry Nathan Guy, told Woodhaven staff and guests that National would rename the Sustainable Farming Fund (SFF), calling it the Future Farming Fund (FFF). He says a National government would boost funding from the present $7 million to $20m a year to grow the agritech sector.

The new fund would have a cross-sector panel of industry, science and environmental groups plus other stakeholders to assess applications for funding.

“It would be aimed at getting farmers, growers and scientists to suggest effective and practical proposals.

“The water taxes and other taxes [would] suck cash out of the productive sector send it off to bureaucracies in Wellington where they [would] try to decide what [would] work best.

“Actually it is the people in the environment making the practical day-to-day decisions about plants, animals, water and effluent who know best what will work.

“We can produce more high quality food for the world and still have high environmental standards. We believe in working with you, the people who make the decisions, the people out on the tractors or wherever on the land. We want to work with you, not punish you like the opposition parties.”

English hopes the new FFF would see new apps developed for mobile phones, new genetics and better ways of propagating plants, and tools that would help farmers and growers improve production but reduce their environmental footprint.

“The Greens say to have a better environment you have to stop doing what you are doing and you lose your job and go home.”

English also launched a stinging attack on Labour’s proposed taxes, saying they were using rural businesses like an ATM to suck cash out of the regions by way of a whole range of taxes.