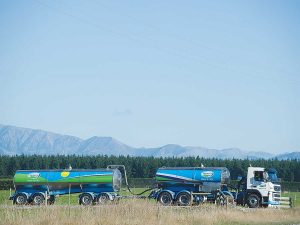 The environment has been at the forefront of how the tanker team at Fonterra's Te Awamutu site has been operating, well before the Covid outbreak.

Less travel and manufacturing activity has meant those in normally polluted cities have been able to breathe easier and the Venice canals have never been clearer.

But how do we make sure those gains are made permanent and aren't lost post-Covid?

The environment has been at the forefront of how the tanker team at Fonterra's Te Awamutu site has been operating, well before the outbreak. It's been reducing emissions, simply by adopting economical driving techniques.

Matt Roberts, depot manager at Te Awamutu, says the co-op's depots across New Zealand have been tasked with demonstrating how drivers can reduce fuel usage. He says Te Awamutu's drivers have risen to the challenge.

"We essentially showed our drivers the data of where we were, and where we needed to be to reach our sustainability targets.

"The presentation touched the hearts and minds of the drivers. When they realised the potential impact they could have on the environment and for our co-op, many of them felt a responsibility to improve."

Not only have the drivers from the Te Awamutu site collectively saved 16,615 litres of fuel and 46 tonnes of CO2 emissions in the past year, it's had a direct financial impact.

"When they see the fuel barrels, it really hits home the reality of the impact they have on the environment, just from changing their driving style - they were really chuffed."

Fonterra tanker driver Stephen Putt says he was inspired to change his driving technique in 2015, when Fonterra nominated him to compete in The Volvo Fuel Challenge.

"The only problem was they only told me about the event a month before! That was a steep learning curve, but it gave me the push I needed to change my driving style completely."

Stephen placed 5th in the New Zealand event, but he reckons if he got another chance, he'd win it. With his current performance, Stephen uses around 40 litres per 100km (the Te Awamutu driver average is 47.66 litres per 100km) but says there's a lot of concentration involved to reach this level of fuel efficiency.

"You've got to stay on your game, it's alway got to be on your mind. I mainly try to scan ahead and memorise the routes, to drive more efficiently."

Techniques include reduced engine braking, maintaining a steady speed, limiting the number of stop-starts and using the truck's momentum to coast around corners.

To remind Te Awamutu drivers of the impact they're having, there's a life-sized VPM (Visual Performance Metric) in the drivers' carpark in the form of fuel barrels.

Matt says, "when they see the fuel barrels, it really hits home the reality of the impact they have on the environment, just from changing their driving style - they were really chuffed."