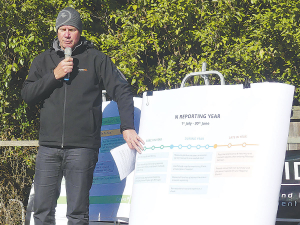 Speaking at the recent Autumn Focus Day at the Lincoln University Demonstration Dairy Farm (LUDF), Barlow said the nitrogen rules from the central Government’s freshwater package basically come down to farmers keeping reliable records of what they are buying and spreading on the land.

He urged them to start now, using whatever software package they had available.

“You can manually record but just make sure you start recording it.”

Barlow said that while Ravensdown and its competitors could provide details of what’s been supplied, farm operators needed to know what’s been applied and will be the ones responsible for providing records to their regional councils for the year starting July 1.

If there were mismatches between what’s supplied and what’s recorded as being applied “the environmental agencies are going to be on your back a bit,” said Barlow.

“Run the occasional nutrient report from whatever system you’re using, to make sure that you’re matching up what you think is happening.”

Barlow said soil testing for fertility would be a good place to start because it could allow farmers to pull back on fertiliser use in some paddocks versus others that may need a bit more.

It was also important for farmers who do not think they can meet the limitations to apply for a resource consent as soon as possible.

“You’re probably leaving your run a little bit late but that’s a really key thing and there’ll be people in that boat, probably in Canterbury and maybe North Otago a little bit.”

The product manager for Ravensdown’s HawkEye fertiliser management software, Barlow said that through HawkeEye the orders go in a file to the spreader units so that they can only spread the required fertiliser where it is meant to go. It is then reconciled back into the system automatically.

“This captured data then feeds into the reporting of the nutrients for your farm, it’s automated and that’s the data that will get fed through to the councils when they start looking at that 190 per hectare of the farm.”

Although HawkEye has been around for about four years already, it was coming into its own with the increased need for close monitoring of fertiliser use, and particularly with the coming 190kg limit.

Barlow said about a quarter of Ravensdown fertiliser sales already go through the HawkEye system.

He used the LUDF Focus Day to unveil a couple of new features of HawkEye now in development, one being a colour heat-map presentation of N use across the farm and the other a graphical representation. Other reporting tools were in the pipeline.

“We’re looking at mobile apps to capture data as well to make life a bit easier when you’re out in the field and offline potentially.”

Ravensdown's developers were about to meet with ECan to discuss how HawkEye could deliver data to the council.

"We will be able to create those reports and automate them inside the system so you don't have to go digging around trying to find all of your records. It'll just be done for you. That's the plan," says Phil Barlow.

Barlow also urged farmers to keep an eye on contractors who might be tempted to get rid of excess fertiliser in the truck by spreading it in the next paddock, potentially putting that paddock over its limit.

"That's why we have these sorts of tools - so you can keep an eye on that. It'll show you as well as give you what those rates will be as you move along.

"So don't be scared to put a little bit of pressure on the spreader to do a good job."

The Government's proposal to reduce future international tourism visitor numbers post-Covid to concentrate on higher spending visitors may solve one problem but create others.