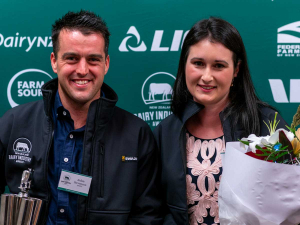 This follows the completion of a review into the NZDIA’s decision to strip Taraua farmers Nick and Rosemari Betram of the title earlier this year. This followed revelation of inappropriate tweets made by Nick Bertram a few years ago.

Sarah and Aidan Stevenson were runner up to the Bertrams.

The review carried out by Susan Hughes QC found that NZDIA general manager and other trustees, including the chair, did not know of the tweets until after the winner had been announced.

Hughes says in conclusion that “it is clear that all I have interviewed are passionate about the dairy industry. All want the New Zealand dairy industry to be seen as world-leading, all strive for excellence.”

Hughes suggests it is important that “all involved in these awards recognise the dangers of social media and the need to remind all parties of this issue at repeated points along the application trajectory, so as to avoid a repetition of these events.”

A NZDIA statement says after speaking with all those directly involved, the report concludes:

• At the time the tweets were made, there was no application by the writer of the tweets for an award.

• At the time the tweets were published in 2017, contact was made with the writer of the tweets, by people associated with NZDIA, to express concern at their content and request that they be taken down.

• The contact that was made was made in a personal capacity and not on behalf of the Trust.

• Those who made contact all believed they were doing so out of a sense of responsibility as alumni of the NZDIA and concern regarding the ill-advisability of the tweets in question.

• The General Manager and other Trustees, including the Chair, did not know of the tweets until after the winner had been announced.

“Where an entrant has been disqualified as a result of falling short of the required standards, reallocation of the place to the next placegetter is fair and reasonable and recognises the purpose set out in the Trust’s mission and vision statements to recognise achievement in the industry and reward leadership.” she says.

With this in mind, the title of 2020 New Zealand Share Farmer of the Year has been offered to Sarah and Aidan Stevenson, from Waikato, which they have accepted.

NZDIA says it congratulates the Stevensons and believe that Sarah and Aidan are great ambassadors for the New Zealand dairy industry and the Awards.

Runners-up are Samuel and Karen Bennett from Southland and the third placegetters are Simon and Natasha Wilkes from Taranaki.

The New Zealand Dairy Industry Awards has received 366 entries for its 2021 competition.