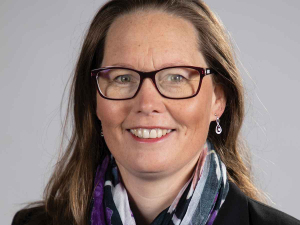 Taranaki farmer Mel Poulton will work with New Zealand’s special agricultural trade envoy, Mike Petersen, over the next three months in preparation for taking over his role on January 1.

Poulton was announced last week as his successor.

“First and foremost, this role is about bringing the voice of food producers to the table,” Poulton told Dairy News.

“I grew up in agri and together with my husband we are producing food and fibre, most of which, like the large majority of NZ’s primary industry products, is exported to many different markets around the world.

“I’ve had a number of experiences offshore at global meetings where the practical knowledge, experience and authority of an actual food producer, or farmer as some would say, has had a real impact on the conversations and debate.”

Poulton says it is difficult to comment too much on her new role yet, other than to honour the work Mike Petersen has done for NZ in the role.

“His relentless positivity and tireless effort really is admirable. I don’t start officially until January, so I’ve got three months to work with Mike, learn the ropes and get up to speed so that I can continue building on the platform he’s set.

“I look forward to working with all the people involved in this role across the industry and internationally.

“We’re all in this together and I’ll be just one part of a big team.”

Asked to comment on challenges facing NZ, particularly in view of the current trading environment, Poulton says broadly speaking both in NZ and worldwide there is significant change taking place.

“No-one really knows where it’s all going to land,” she said.

“What we do know is that change is constant. It always has been.  We can look back at the change we’ve all been part of and have confidence that we embraced opportunities, we’ve adapted, we’ve created solutions and we will continue to do this.

“Navigating our way through change needs everyone positively and constructively contributing to solutions, from our food producers all the way through the industry, including Government ministries and our trade staff here in NZ and offshore.

“We’re all part of the NZ Team and it’s going to take everyone playing their part in working together to navigate our way through change and capture the opportunities that arise.”

The NZ dairy sector is full of amazing people doing good work on farms and in our markets, says Poulton.

“As much as dairy has been in the spotlight on some challenging issues, the people I know in dairy have been inspirational in their engagement on the issues.

“They’ve been tireless in their efforts to be solutions focussed, their leadership in navigating change, their innovation to connect with consumers and the NZ population, and their open gate initiatives.

“In my engagements offshore [I’ve seen] the NZ dairy sector is held in very high regard and just about everyone involved in agri around the world knows something about NZ dairy and its contribution internationally from a trade perspective.

“NZ dairy farmers and the dairy industry are producing highly nutritious food and beverages, innovative products and valuable nutritional solutions for people in many different countries.

“Keep up the good work.”

Poulton is hands-on with husband Mike on an intergenerational Taranaki family sheep and beef farm that has been in Mike’s family for about 100 years.

They are stewards of 1011ha, consisting of mostly medium to hard hill country,  and they have a 28ha block down the road which is all flat and used for finishing stock, she says.

In a Nuffield Scholarship she was awarded in 2014 Poulton “set out to understand the export of NZ expertise with regard to trade”.

“Food producers and the primary industry invest a lot of money in developing knowledge, science, technology and solutions to the challenges and opportunities we face in our farming systems.”

Her study tour touched on international science collaboration, offshore investments in farming systems from different countries including NZ, trade negotiations and global policy with the UNFAO and WTO.

She also looked a little at intellectual property and how we value it, and she explored completely different farming systems such as Tilapia fish farming, an American investment in Colombia.

“I wanted to maximise the opportunity as a Nuffield scholar to get into places and spaces that I otherwise didn’t think I was ever going to get a chance to look at. So while I was travelling I took a broad look at as much as I possibly could. This was a great approach for learning.”

She travelled widely in South America and Latin America, the USA, Europe and Israel and visited at least 10 countries in her scholarship year.

Poulton is a member of the Global Farmer Network which she says is amplifying the voice of farmers and food producers on the global stage, promoting trade, science and technology and other issues important to food producers.

“Along with other folk in NZ I’ve been contributing to some of the global conversations on issues where I can bring a NZ perspective.”

In the last month this included involvement in the Global Agenda on Livestock Sustainability (GASL) and promotion of issues on mobile digital connectivity.

Changes need to be made to the multilateral trading system, says commercial law firm Chapman Tripp.