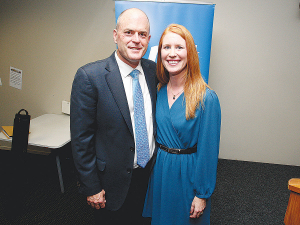 At the recent DairyNZ Farmers Forum, Muller opened up about his 53 days as leader of the National Party. He resigned as leader and took stress leave from Parliament.

He told about 400 farmers that the dairy sector has faced criticism for a long time.

"This is the same sector that people acknowledged was keeping the country afloat over the past year or so," he says.

"There needs to be a great commitment to support these people in times of challenge. That's why I'm standing here.

"I hope sharing my journey can assist you in any way to have hard conversations with your neighbours."

Muller says he wasn't an expert in mental health issues but was someone who had lived the experience.

"I was one of those younger guys in school that talked too much adn wanted to be Prime Minister one day," he says.

"I was obsessed with politics and it ended up biting me a bit."

Muller's stint was opposition leader hadn't started well and the first few days were taken up by media frenzy around a red hat in his office.

Five days into the job, while being driven back to Tauranga, he suffered the first panic attack.

He started talking to himself in the back of the car, Reaching home, Muller says he burst into tears and hugged his wife.

"Now I had experience hugging my wife but never bursting into tears," he says.

A few days later the panic attack happened again. Muller says on the farm it can be extremely challenging for the farmer's partner.

Muller says part of the reason he's publicly discussing his experience is because his teenager kids are okay with him sharing it.

"Their mates thought it was cool I was sharing it... 15 years ago having a mental breakdown publicly would have been the end of my career," he says.

"My kids' mates were comfortable around conversations on mental health. When we were kids there's no way we could have a conversation like this."

Muller, a former Fonterra executive, pledged to help farmers in any way he can. He understands how it feels to be alone.

"I felt desperately alone and I have a loving wife and loving family, when I was opposition leader, I could not have been more alone.

"Just alone by yourself on the back of the farm, I know how you feel."

The Mental Health Foundation is launching a free e-learning package to help people managers and workplace wellbeing professionals talk about mental health in the workplace.

Titled Open Minds, the e-learning package focuses on how to include, support and prevent discrimination towards New Zealanders with mental distress or illness in the workplace.

This e-learning package builds on the first series of the Mental Health Foundation's Open Minds resources. It focuses on helping people managers in both outdoor and indoor workplaces understand why opening the conversation about mental health in the workplace, supporting employees with mental distress through the tough times and creating mentally-healthy workplace cultures hold both financial and workplace culture incentives.