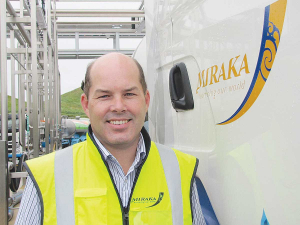 Richard Wyeth joined Miraka eleven years ago when Miraka was just a plan with a building site out west from Taupo.

Wyeth is leaving the Taupo-based and Maori-owned dairy company to take up a new, and at this stage undisclosed, position.

He joined Miraka eleven years ago when Miraka was just a plan with a building site out west from Taupo. He had the task of helping to raise the money for the venture and overseeing the construction of the plant. Miraka’s founding shareholders were two Maori Trusts – Wairarapa Moana, which owns a significant number of dairy farms in the central North Island, and Tuaropaki, which owns geothermal power that is used to run the factory.

Wyeth says it’s been a pretty phenomenal journey over the last 11 years.

“The highlight has been getting the plant up and running on time and under budget and then delivering a profit very early on,” he told Dairy News.

“That was hugely satisfying and pretty amazing. There were plenty of people who didn’t want to see it work, so to be able to deliver it and get the business established was very satisfying,” he says.

Under his leadership as chief executive, Miraka has shone as a beacon of excellence in a dairy industry that has often been under fire. Miraka introduced a scheme called Te Ara Miraka, which incentivises its farmer shareholders to perform to the highest standards in terms of milk quality and the way they produce their milk, with strong emphasis on sustainability. Other companies have quietly copied this, but Miraka has always been in the lead.

Wyeth says Te Ara Miraka and other initiatives by the company have helped shift dairy farming to “where it needs to go”. He concedes that it is possibly easier for a small company like Miraka to do this.

“But to come up with these ideas and execute them speaks volumes for the Miraka team,” he says.

Wyeth has no Maori background or experience with working with Maori before joining Miraka and says his time with the company has been a fascinating experience.

“I have really enjoyed it here, but I think coming from a big family helped in some ways because I was used to knowing my second and third cousins quite well. Being involved in a Maori business is very much understanding how big families operate, so I enjoyed the challenge,” he says.

Wyeth has not only been an excellent CEO, but also a very popular and much liked person. Staff are known to be sad to see him leave.

He says he wasn’t actively looking for a new role but  says when he was approached for the new position he recognised that although it was a difficult decision it was probably a  good opportunity to move.

“After eleven years it’s also probably a good time for someone else to look into Miraka as well and put their mark on the business. It’s bitter sweet in some ways because I will certainly miss everyone and, in fact, Miraka feels a bit like my own child in many ways,” he says.

A safe pair of hands

Richard Wyeth says one of the success factors in the Miraka story was developing a good relationship with its chairman, Kingi Smiler. He says he and Smiler quickly developed a good working relationship and worked well together.

“I am very grateful to Kingi and the great opportunities he gave me,” he says.

Smiler has praised the work of Wyeth saying finding someone with his skills and approach to Miraka’s values-based culture will be a hard task. During his time as CEO, the Māori-owned organisation has grown to over 140 employees, producing 240m UHT units and 35,000 metric tonnes of powdered milk per annum, with a turnover of more than $250 million.

“Richard’s leadership has enabled Miraka to grow from a small local company to become a strong competitor internationally in the dairy industry. His approach has embodied the values of Miraka’s founders, ensuring that excellence, kaitiakitanga, integrity, innovation and tikanga are used as a base for all core business decisions. Richard has also established a competent and experienced executive team, who are well-placed to deliver on this year’s business strategy,” he says.

Smiler says Miraka’s response during the Covid pandemic has given Richard confidence that he is leaving the organisation in good hands. He says our people have really pulled together to take on the challenges that Covid has presented Miraka and the dairy industry.

“Throughout one of the most significant events in our company’s history, we have continued to keep our staff employed, our production lines running, and our communities safe,” he says.