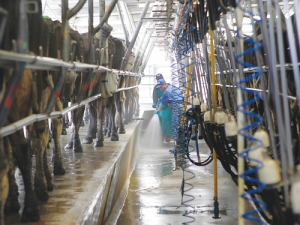 The time is right to enter the dairy industry as a sharemilker, says Neil Filer.

This tough year is the time for young people to get the foot in the door to sharemilking, says Feds sharemilker chairman Neil Filer.

"This is the time to secure a contract, get yourself established and make a name for yourself and when the payout comes right – boom, you're in the money," he says.

The next six to eight weeks will be an "interesting time" for renegotiations of contracts. Some older sharemilkers may leave the industry or farmers may find the figures stack up to take on sharemilkers – that opens up opportunities.

The next few weeks could be a telling time for the industry, Filer says.

"A lot of guys are sitting quietly waiting for the upside but it doesn't look close on the horizon so I think it's going to be an interesting time for the next six to eight weeks," he told Dairy News.

"People talk about their contracts and renegotiating and next season – it is all sort of happening in the next 6-8 weeks."

Some older sharemilkers may decide to walk away.

"They may be getting a bit long in the tooth and they decide to get out, but there is always some young guys wanting to come in at the bottom. That is the way the system works," he says.

"The young guys can wait this out, they've got plenty of time. If you are early, mid or even late 20s this is nothing. You've got a good 20 years in you.

"This is definitely a good time to get in – there are definitely silver linings in low payouts. This is when things happen. In the high payouts no one is hiring sharemilkers."

He says farmers think in high payout years that the sharemilkers are making too much money. But if they did the numbers on a sharemilker in this payout, they are getting good value for their percentages.

"We just need to go back to our old-school cheap milk. It's been done before – this is not a new scenario," he says.

"It's only been in the last 10 years that everyone has got a bit carried away with high payouts and this and that. But the old school – they know how to get milk off grass.

"That is what our advantage is and we will just go back to it. Sharemilkers can milk cheap, live cheap, pay our bills and wait it out.

"There's a freezer full of beef and plenty of milk in the freezer for the kids. It's not a big deal having a whole lot of money in the bank."

But he says "if you are long in the tooth and had a gutsful, get out of the way and make room for someone else".

Young people wanting to get ahead need to be "Johnny on the spot when the payout comes right – with volatility it could be tomorrow, who knows?"

"We are only one drought away..... In the meantime just hang in there, keep your chin up."

Sharemilkers will definitely be re-examining their options now and the sector will have a shake up in the next couple of months, says Filer.

The message earlier in the season was to sit it out.

But right now sharemilkers are starting to do it tough with Open Country's payout just going down and Fonterra's auction "didn't look very flash".

"The message earlier in the season when the payout was looking really low – we've had a bit of upside since then – the message was 'let's milk it out and do things properly'.

"If sharemilkers were doing it tough and not making money, don't walk out mid-season – let's get to February and talk about it then, when you are supposed to.

"That was the message then and now we are approaching that period and things are not looking a whole lot rosier so who knows. It will be interest times."

But he doesn't think the sharemilker model will change. "The model works because when the farm owners get under pressure they get their labour for a fair price.

"That is the beauty of sharemilking, that is just the way the games goes. If you stick it out, it stops farm businesses being a risk when no one is making any money."

However he says some contract milkers this season are on "quite a good wicket" in this payout.

"Guys that have signed up anything over $1.30-$1.40 on percentages... a lot of farmer owners put the sharemilkers on contracts because they thought the payouts were going to be so high."