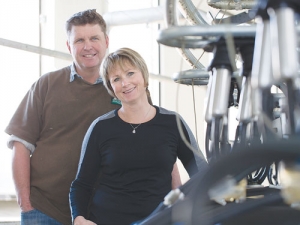 What happens when an unsustainable farm dairy needs to be replaced but the need coincides with a low payout season?

Wardville farmers Shane and Jacque Ashley were faced with this dilemma in the spring of 2014, says Waikato Milking Systems (WMS).

"It was taking nearly four hours to put 630 cows through the 40-bail rotary built in 1988, so the last cows at each milking were spending as much as eight hours a day off pasture, standing on concrete," Ashley said.

"The slow milking time was justifiable when the cows were doing 25L a day but production has improved and at 35L per cow the old shed was being found out. It had become unsustainable and had to be replaced."

The purchase of the 236ha farm in 2001 was a return home for the Ashleys, who began farming in Waikato during the 1980s.

"Our goal was always farm ownership, so after sharemilking in Waikato we moved to Northland to build equity and over 14 years purchased and operated three small (120-150 cow) farms. The sale of those properties enabled us to return home to Waikato."

They started with 112ha, later buying two neighbouring blocks of 50 and 74ha to make up the current 236ha which milks 650 Friesian/Jersey and crossbred cows. The herd produces 640kgMS/cow and has a breeding worth of 160 and production worth of 230, putting it in the top 5% in the country. Around 1.8 tonne of maize and 1 tonne of KPE per cow is fed per year plus pasture.

The need to contain costs was fundamental to the decision to build a new farm dairy.

"The existing yards were well integrated with the feedpad, effluent and electricity so we decided to retain them, demolish the old shed and build again on the same site. This meant demolishing the old and building the new had to be completed between seasons.

"In a normal year the cows are only out for two months and we needed at least twice that, which meant drying off the cows two months early, on March 1.

"The opportunity cost of drying off early was less because the payout was down: it would have been unaffordable at $8/kgMS, so we decided this was the time to do it."

Decision made, the Ashleys then spent a month visiting dairy farms to look at new rotaries. "We visited 20 rotaries during October 2014 and looked at a range of options, finally opting for a Centrus 54-bail platform from WMS.

"Overall we liked the simplicity of the Waikato systems; you go into any one of their sheds and there's no clutter, but more importantly we were won over by the technological advantages of their composite platform."

The deck sections of the Centrus 54 are formed in a multi-layer laminated process including Kevlar, a material used in the construction of aircraft, so the platforms are five times stronger and 80% lighter than the traditional concrete type. A concrete platform weighs 35 tonnes, and must then carry 30 tonnes of stock. The Centrus weighs only seven tonnes – 42 tonnes fully loaded -- so it needs less energy to turn it and it suffers less wear and tear.

"We also liked the deck surface's resistance to chemicals and effluent; it will never pit like concrete and will always look good.

"The variable speed platform, milk pump, drive and vacuum pump drive draw power only on demand so it'll be cheaper to run."

The dates of the project are indelibly printed in Shane's memory.

"We dried off on March 1 and started demolishing the old shed the next day to get a clean compacted site for the builders arriving on March 9.

"We had an incredibly tight time-frame: the herd was due to start calving in 16 weeks on July 14, with 330 cows due in the first 11 days, and we had no plan B, no alternative shed to use so the new dairy had to be completed and ready to go."

The first milking was on July 9.

"We've got happier staff whose time milking has reduced from eight hours to five and a half. The deeper bails and rubber mats seem to make it easier for the cows to load on the platform and the overall environment is quiet and clean. We're delighted with this shed, there's nothing we'd change."

Ashley advises farmers facing the need to replace their sheds in tight times to do their homework and look at all the options.

"You don't need to go the whole hog if you opt for a system which is modular; just build the basis of the shed and add technology modules when you need and can afford them."