Loshni Manikam is Dairy Woman of the Year 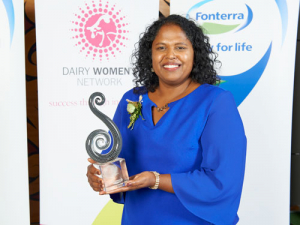 Southland dairy farmer and leadership coach, Loshni Manikam has been chosen as the Fonterra Dairy Woman of the Year.

The human behaviour and leadership expert took out the 2018 title from an impressive line-up which included Tararua district mayor Tracey Collis and Hawke’s Bay dairy consultant Rachel Baker at an awards ceremony in Rotorua last night.

Manikam, originally from South Africa, milks 600 cows with her husband and three children in Winton, Southland. In 2007 they were named Southland Sharemilker of the Year, before progressing to their current equity partnership.

A former lawyer, Manikam transitioned from dairy farming to leadership coaching after receiving her coach certification in 2012. She is the founding director of Iceberg Coaching and a strategic consultant for Farmstrong, working to support the wellbeing of farming communities.

She is also a trustee of the Southern Dairy Development Trust, a coach and facilitator of the Agri-Women’s Development Trust’s Escalator Programme, and a Federated Farmers Southland executive member.

Dairy Women’s Network chief executive Zelda de Villiers says Manikam has a unique ability to engage with communities and stakeholders at a range of levels.

“What stood out to us was Loshni’s dedication to growing leadership among farming communities, and her determination to change the headspace in which farmers operate – that they are more than what they do, they are not just their farms and their bottom lines,” says de Villiers.

“Loshni strives to be part of change in the industry, and she combines her grassroots experience and enthusiasm with her ability to engage at the highest levels. She is well-deserving of the Fonterra Dairy Woman of the Year title.”

Manikam says receiving the title is proof positive that the success of “an ordinary dairy farming woman” can translate far and wide. “It shows you can raise a family and still progress through the industry, reach the top, and have a say at industry level,” she says.

She says it’s an honour to be recognised for her work. “I am most passionate about people and their untapped potential. It really excites me how growing people’s awareness of their own strengths has such a positive and far-reaching impact on everyone around them.”

The award was part of a gala dinner at the Dairy Women’s Network’s annual conference, which also marked the Network’s 20th year.