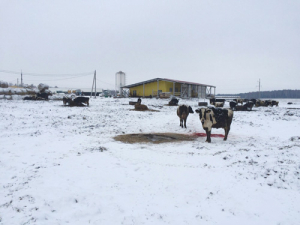 The fine milk and butter products of New Zealand have long had a good reputation in Russia. A journalist in central Russia, Nataliya Shkol'naya, sent Dairy News this exclusive, rare look into the ordinary citizen's view of dairy markets and embargoes.

Even when Russia was in the Union of Soviet Socialist Republics, every student knew that New Zealand was the 'land of the long white cloud', had the best rugby players and the most delicious milk and butter.

But the Fonterra food safety scare of 2013 was well known in this country, and Russia insisted on stopping imports of NZ products until a full investigation was held.

Russia is going through a hard time at present: many countries have imposed sanctions and in retaliation Russia restricts the import of food products. But about year ago (August 17, 2015) Russia decided to cancel the limits and allow importing of dairy products from 29 NZ dairy processing facilities.

This fact speaks for itself on how valuable the products of 'the land of the long while cloud' are to Russia.

But if Fonterra has ever told Russia that the botulism scare of 2013 was a false alarm, the information was never passed to the public. There are a lot of detailed articles about the bacteria, how dangerous it was and how the government was saving us by not importing products.

Three years later there has been a small note (in the news media) to say they were starting to import again. (Shkol'naya was told by Dairy News last week that the scare was a false alarm).

There are so many different varieties of infant formula on the shelves of Russian shops that you don't know where to start. To make it easier for people to find what they need, the Russian experts make yearly ratings of infant formula. Often the opinion of professionals does not match the opinion of moms and dads, who choose products based on colorful packaging and affordable prices.

Unfortunately, city residents are unable to directly buy dairy products from farmers, to ensure the quality of such products, given the distance of farms from the cities. So when they choose dairy products in the shops they have to rely on their intuition, neighbours' advice or television advertisements.

Unfortunately, the results of annual tests of dairy product quality are not encouraging: consumers of dairy products continue to be deceived. Sadly, the answer to the question "what products will have highest demand?" is simple – cheap and healthy. Russians understood a long time ago that high price does not mean high quality.

It is not a secret that before the 2014 embargo on 'certain kinds' of agricultural products, raw materials and foodstuffs), Russia was the world's fourth-largest importer of dairy products. So we can still argue about who is more affected by the 'war of sanctions' – the buyers or the sellers. It is noticed by consumers that exclusion of essential exporting countries led to price stabilisation, and at some points to a decrease in product prices.

Data from 2015 show NZ is among the five largest suppliers of dairy products:

Note this example of the magnitude of the loss for European Union countries and Australia due to embargo.

Recently Russia's President Vladimir Putin signed an order extending the embargo on food imports, in retaliation to sanctions, until the end of 2017. In the Russian government's opinion, the import restriction policy in Russia stimulates the development of the food industry while foreign farmers continue to bear large losses.

But in the opinion of average Russian citizens, whose monthly incomes US$150–200, nothing has really changed.

They didn't even notice the absence of Finnish oil, Lithuanian curds or cheese with a delicate crust of penicillin from Italy and France, because they were unaware of their presence in the first place: their incomes discourage them from even approaching the store counters where products are located.

It's obvious that embargo (on imports into Russia) was imposed not to stimulate development of Russian industries, but to try to remind the European Union that it needs Russian markets.

In contrast to officialdom, the average Russian citizen doesn't really care. Foreign policy does not apply to the most important issues; foreign policy is less important than the economy, standard of living, unemployment, health care, inflation, social policy, education and pensions.

An analyst at the Center for the Study of the Dairy Market, Ekaterina Zakharova, says that on January 1, 2016, in the Russian Federation there were 215,218 farms of all kinds, and the centre says 21,312 (in late 2014) are engaged in milk production.

In its public speeches the Ministry of Agriculture says it wants to develop the dairy industry. But in reality, according to experts, the ministry
does nothing to achieve that goal.

The dairy industry in Russia is now in quite a difficult situation. A decrease in the number of dairy farms due to low investment places the industry behind pig or poultry farming.

At the same time, the dairy industry is technologically advanced and capital-intensive, with a long payback period. This helps explain the shortage of dairy products on the Russian market and Russia's reliance on imports of dairy products.

The main difference between New Zealand and Russia is the short duration of the grazing period says Alexandra Sayapin, a farmer in the Kaluga region of Russia, who recently introduced robotic milking.

Russia has three types of dairy farm: firstly, old farms built back in Soviet era, about 30-40 years ago. Usually these have 100-200 head of cattle, kept in farm buildings during winter and let outside during summer. Preferred species are Simmental and Swedish.

They are generally inefficient.

Secondly is a type of farm started in about 2000, prompted by the growth of dairying. Animal numbers are much larger – 800 to 5000 – and they are housed in barns with rotary milking platforms and feeding equipment.

There is no grazing; the cows are kept inside the whole year and eat hay. The preferred species is Holstein.

Thirdly is the farm type which has 20-100 head of cattle.

“I’ve got this type of farm, but a bit different from original one: I’ve got 400 head,” Sayapin says.

“Recently, farmers demanded robotic milking systems. The machine is very useful yet very expensive. In order to afford it I had to increase the herd size on my farm where they are grazing the whole year. There was no money left for the stable after buying robots,” Sayapin laughs.

“The cows are out of the cold on a special deep litter, spread with the use of special technology.

“There’s layer upon layer of dry straw, growing layers with time; the bottom straw begins to ‘burn’, and even minus 35°C it is warm for the cows to lie on. My species is Red crossbred cattle. They have high cold resistance.

“There are no problems with cleaning up the manure. The building with the milking robots has a slit floor so all manure falls there and after it fills up it gets pumped out. Then it is diluted with water and in this form is taken out to a field.”

Milk is processed on the farm and a number of branded products are produced, including cottage cheese and yoghurt.