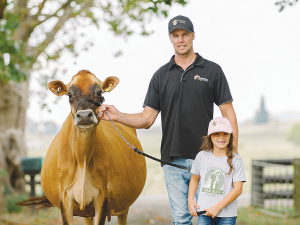 Ferguson is a well-known face within Ferdon Genetics’ exceptional Jersey operation at Otorohanga. He contract milks 235 cows on an 80ha farm in Te Awamutu.

He will be the third generation to officiate at Christchurch Show.

Ferguson has worked in Australia preparing cattle and in Semex’s Hall of Fame at the Royal Agricultural Winter Fair in Toronto, Canada. His long-term goals include returning to Ferdon.

“I love seeing good cows, no matter what breed they are,” Ferguson said.

“A good cow is a good cow, regardless of her colour.”

The on-farm concept has been successfully run in the Waikato twice. Canterbury will welcome Holstein, Jersey, Ayrshire, Milking Shorthorn, and Brown Swiss entries this year. Geographically, the competition will encompass exhibitors from the greater Canterbury region, who will get their cattle show-ready at home on their properties.

Ferguson will visit the farms involved, with the exhibitors will parade their cattle as they would at the show but without the rest of the competition standing side-by-side.

Placings will be decided by pointing the cattle within their breed and age-groups. A junior, intermediate and senior champion will be awarded in every breed. And, a supreme champion of all breeds will be announced at the competition’s completion.

Prize giving will be held at a public event in the Sheep Breeders’ Bar at Canterbury Agricultural Park, on November 13.

On what should have been the second and third days of the cancelled National Fieldays, a group of Morrinsville businesses used June 11-12 to launch and run their own event.