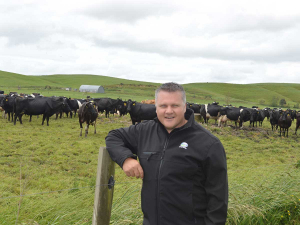 Fonterra chief executive Miles Hurrell says NZ milk is the most valued in the world.

Fonterra chief executive Miles Hurrell says NZ's milk is the most valued in the world and demand is soaring.

But he cautioned that this comes at a time when total milk supply in New Zealand is likely to decline, and flatten at best, therefore a new capital structure was vital to the co-operative's new strategy.

The co-op is also continuing to withdraw from overseas milk pools with businesses in Chile and Australia under review.

And as an ageing global population seeks more dairy nutrition, NZ is in a great position to grow the value of its milk, says Hurrell.

"The world wants all we've got - high quality nutritious milk," he told journalists.

Hurrell says NZ can be selective about what it does with its milk and generate maximum value.

But changes are needed.

"On one hand, this requires the right capital structure to help ensure we don't lose the benefits of what generations of farmers have built - a New Zealand dairy co-operative of scale," he says.

"But on the other hand, it gives us more options to be selective about what we do with our co-op's milk. In doing so, we can increase the value we generate for farmers and New Zealand over the next decade."

To make this happen, Fonterra announced three strategic choices: continue to focus on New Zealand milk; be a leader in sustainability; and be a leader in dairy innovation and science. Hurrell says this requires Fonterra to focus its capital and people on enhancing New Zealand milk and for these reasons the co-op has reviewed the ownership of its two other milk pools - in Australia and Chile.

"Soprole is a leading Chilean dairy brand, and Prolesur is a subsidiary of Soprole focused on sourcing milk and manufacturing products in Southern Chile.

"The operations do not require any New Zealand-sourced milk or expertise, and in this context, we are starting the process to divest our integrated investment in Chile."

Fonterra Australia is on strategy for the co-op and remains an important export market for New Zealand milk, especially for Foodservice products and advanced ingredients.

"We are considering the most appropriate ownership structure for this business. One option is an IPO, with the intention that we retain a significant stake.

"We see both these moves as critical to enabling greater focus on our New Zealand milk and, importantly, allowing us to free up capital, much of which is intended to be returned to shareholders."

The co-op hopes to return $1 billion to shareholders from these asset sales within three years.

Hurrell also signalled that to strengthen the value proposition of its New Zealand milk, the co-op will increase investment in sustainability and R&D by over 50% to around $160 million per annum by 2030.

Hurrell says New Zealand has the unique position of being the lowest carbon producing dairy nation on the planet.

"And when you combine this with our pasture-based model, animal welfare standards and scale efficiency, we have something that can't be replicated.

"But we can't slow down now. Customers want to know where their food comes from and the environmental impact it leaves, and a farmer's livelihood relies on a stable climate and healthy ecosystems.

"This is why we have an aspiration for our co-op to be net zero carbon by 2050. Over the next decade we intend to invest around $1 billion in reducing carbon emissions and improving water efficiency and treatment at our manufacturing sites.

"We also know that to maintain our relative carbon footprint advantage against the northern hemispher farming system, we must solve the methane challenge."

Total group earnings before tax was up 8% to $952m; group normalised operating expenditure down 3% to $2.2 billion.

Hurrell says a focus on financial discipline has paid off.

Reported profit after tax was $599 million, down $60m on the previous year due to significant gains from divestments that year.

"I want to thank our farmer owners and employees for their hard work and commitment over the last few years that has got us to this position," says Hurrell.

"Together, we've shored up foundations and done this despite the challenges of operating in a Covid-19 world."