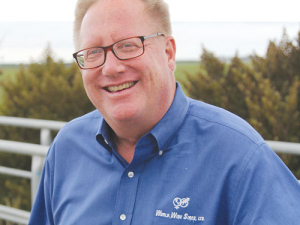 Farmers must start figuring how to reduce cow numbers without losing farm production or profit.

He told Dairy News that Netherlands farmers, facing growing social and environmental concerns, are being asked to cut their herds by 10%.

“It seems a frightening prospect but Dutch farmers are facing it head-on, thinking over every aspect of their operations; they must still produce a certain amount of milk and need genetics that will enable them to reduce the head count but not the milk output,” Schouten says.

“And once they have those genetics, they need a farming and feeding system that will enable the herd to express their genetic potential.”

Schouten has headed World Wide Sires for 30 years, each year visiting 60 countries with colleagues to talk to farmers.

“Whether you’re on a farm in Turkey, Russia, Holland, China or New Zealand the challenges remain the same – to efficiently produce quality food for which demand is growing worldwide.

“But we need to do that in socially and environmentally conscious ways, and so the challenge is to revise farming systems for this new era.

“The focus in the last few decades has been growth – a numbers game with herd size growing worldwide. But our industry relies on synergy with nature and... we are at, or approaching, a crossroads which requires change on a significant scale, on every farm around the world.

“The demand for milk protein will only increase so the challenge for everyone in the global dairy industry is to produce the most from the least or, in other words, turn the ‘numbers game’ on its head so every cow in a herd has the genetic potential to deliver consistently high milk solids.”

World Wide Sires, in NZ about 30 years, has this year increased sales by 46%, Schouten says. Much of that demand is driven by the co-op’s animal databases being the largest in the world, he says.

“World Wide Sires is the number one supplier of bovine semen -- 90 million inseminations in 2016 in at least 90 countries. We were among the first to launch a successful commercial genomic product.”

Schouten says the bull team is made up of 421 genomic and 355 proven bulls selected from a database of nearly 1000 elite sires.

“Demand for genomically selected sires is increasing: in the US demand is 55% genomic and 45% proven, whereas globally it is 63% proven and 37% genomic.

“The success of our genomic offering – and farmer confidence – comes down to the predictor group database we use which includes 35,000 proven bulls and 1.3 million females. No other company in the world can match that or the reliability it enables. The correlation between the genomic prediction and what the daughter actually produces is very high and consistent.

Schouten says “it’s not our job to tell farmers what they should select for; it is our job, however, to listen to what they want to achieve, to look at their farming system, do a genetic audit and come up with a list of sires which will enable them to reduce numbers and increase production.

“One size doesn’t fit all so we work with the farmer onfarm to tailor a solution to help them achieve their business and lifestyle goals.

“We understand that BW is the currency most farmers understand in this country but that often comes with a lack of engagement with the genetics being used on the herd. Many farmers I’ve talked to in NZ admit they get ‘bull of the day’ without really knowing or anticipating anything other than a repeat of the mother.

“A lot of farmers are replicating the herd, not improving it or setting the farm up for the new environment which is around the corner.

“We’re simply saying there is an alternative: it is possible to milk fewer, higher producing cows. Sure they may not have BW against their number but their currency will show where it counts – in the vat and in the bank.”