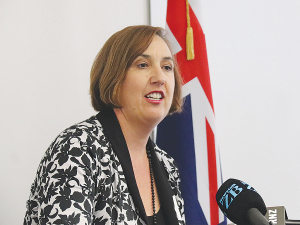 Fonterra says the Government's new methane target is very ambitious and will need hefty spending on R&D to give farmers the solutions they need to achieve.

Carolyn Mortland, Fonterra’s director of sustainability, who attended the news conference with the Prime Minister and the Climate Change Minister last week, says the co-op believes it is possible to have a prosperous agricultural sector and positive environmental outcomes. But she dodged journalists’ questions on whether Fonterra would support any move to reduce dairy cow numbers to meet the targets of the new legislation.

She says change and challenges are a constant for farmers and have been for decades.

“When we give farmers the parameters they can operate in they change and adapt. What we are telling farmers to do is recognise that our customers, consumers and communities want sustainable, ethically produced food.

“We will support our farmers in all sorts of ways to achieve that,” she says.

Mortland says the Government targets have given a clear signal to farmers and NZ as to the direction of travel and Fonterra will work hand in hand with farmers to support them in this.

He says the provisional target for methane at the top end of the range was always going to cause alarm but it’s not for him to judge where it might finally end up.

O’Connor says the initial challenge for methane reduction of 10% by 2030 continues what has been occurring in farming for the last 15 years.

“Even now people are working on things such as plantain and other methods of reducing nitrogen fertilisers and a number of initiatives to keep ahead of climate change impact,” he says.