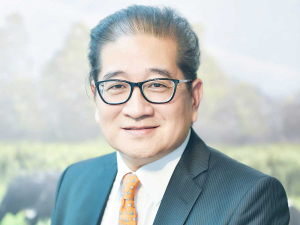 Chow, currently president of NZMP for Greater China, will hold the newly created role as the co-op works though the recruitment process for a permanent appointment.

Fonterra has confirmed that its president for Greater China Consumer and Foodservice, Christina Zhu has resigned.

Zhu had played a key role in the development of Fonterra’s Chinese markets. She also sat on the board of troubled company Beingmate as a Fonterra representative.

The dairy giant paid $750 million for its 18.8% shareholding in March 2015, in a bid to gain access to Chinese consumers for its infant formula. Beingmate’s financial woes forced the co-op to write down the investment by $439m: it is now in the process of selling those shares.

Fonterra chief executive Miles Hurrell says the creation of this new role on the Fonterra management team reflects the importance of the China market to the co-op: it will sit alongside the other regional CEO roles for AMENA, Kelvin Wickham, and APAC, Judith Swales.

“Teh-Han, who is currently our President NZMP for Greater China and South East Asia, has agreed to take on this responsibility in an interim capacity while we work through the recruitment process for a permanent CEO Greater China,” says Hurrell.

“Teh-Han is a proven food sector executive, with extensive experience leading large organisations across Consumer and Ingredients businesses. During his time at Fonterra he’s demonstrated his ability to grow a business by putting customers front and centre, which is exactly what our new operating model is about.”

Before joining Fonterra in 2015, Teh-Han was the CEO of Louis Dreyfus in China, a leading merchant and processor of agricultural goods. He was also managing director Greater China for Simplot, a food and agribusiness company.