Feed trials contest use of imports 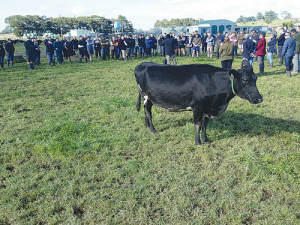 NDDT has for two years been running a farm systems study investigating how farmers might reduce their use of imported feed.

“We are starting to build confidence in our results and they are really interesting,” says Boom.

Boom says dairy farmers are starting to learn about the fat evaluation index (FEI) of their milk. In some cases, the FEI will show the need to reduce the use of palm kernel expeller (PKE) to avoid exceeding Fonterra limits.

“This is going to result in them having to change their systems. We hope they can learn from what we have been studying at NARF.”

NARF is split up into three small farms: one uses only homegrown pasture (grass only farm), the second also doesn’t import feed but grows crops (cropping farm), and the third uses PKE to fill in feed gaps (PKE farm).

This season the PKE farm had the highest production at 1118kgMS/ha, the cropping farm was next at 1053kgMS/ha, and the grass only farm produced 965kgMS/ha.

Last season the cropping farm produced the most and then the PKE farm, followed by the grass-only farm.

“The cropping farm struggled during spring,” says Boom. “This was somewhat due to very soft soils that had been cropped the previous season.” Despite this, all farms exceeded their 2015-16 production this season.

In the 2015-16 season the grass-only farm was slightly more profitable than the other farms at the $3.90/kgMS milk price, despite having the lowest production of the three farms.

The draft 2016-17 financial results have been calculated and were presented at the NARF field day on June 8. Farm working expenses were $3.81/kgMS for the grass-only farm, $4.21/kgMS for the cropping farm and $3.95/kgMS for the PKE farm.

At a $6/kgMS milk price, the PKE farm had marginally more operating profit than the grass-only farm at $2713/ha compared to $2670/ha respectively. The cropping farm was lower with an operating profit of $2207/ha. The figures are sensitive to milk price however.

“At a $6/kgMS milk price, there was 150kgMS difference in production per ha but similar profit levels between the grass-only and PKE farms. We all need to be careful we farm for profit not just production,” says Boom.

“At NARF we measure the extra labour and machinery costs that cropping or supplementary feeding incur. Sometimes the simple systems are the best, though grass-only farming definitely has its risks.

“Use of PKE is going to be challenged.”

Since January, milk from the PKE farm at NARF exceeded the FEI limit about 30% of the time, while cows were receiving 3kg PKE through much of this time.

“Farmers are going to quickly learn about the interaction of PKE and FEI on their farms. This is something we don’t need to worry about on the grass-only farm,” says Boom.

“The trial demonstrates what we see as best practice in how each of these systems operates, not that we get it right all the time.

“Getting the grass only farm through a drought could be challenging; that farm was fortunate it rained in February this year. We are running this trial for a third season and possibly a fourth season. We want to ensure we have tested the systems in a variety of different climatic conditions.”

• For more information or to subscribe to fortnightly email updates, go to www.nddt.nz

A new calf cereal with no palm kernel expeller (PKE) is on sale for the calving season, says developer Agrifeeds.

A dwindling supply of supplementary feed is one problem facing Southland farmers working through drought.