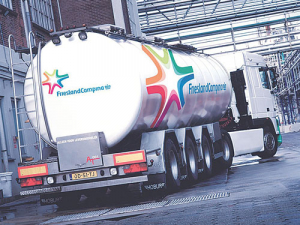 A group of farmer shareholders in the European co-op FrieslandCampina will start producing milk without using genetically engineered animal feed.

The few hundred farmers living near two FrieslandCampina cheese plants in Germany will participate in the pilot project. They will get a premium price for the GE-free milk, to be made into cheese for the German market.

The products will conform to the VLOG standard set by a German association responsible for certifying products and issuing the Ohne Gentechnik label. The VLOG association was founded in 2010 and is recognised by the German government.

A number of FrieslandCampina dairy farmers in Germany are already producing milk bearing the Ohne Gentechnik label for Landliebe products.

FrieslandCampina says the move will capitalise on the growing demand from German supermarkets for foodstuffs produced without any genetic engineering in the production chain.

A few hundred member dairy farmers in the vicinity of the cheese plants in Born and Workum have the opportunity to participate in the pilot. These may give their cows only feed that meets the VLOG criteria.

“It is of major importance that no use is made of feed produced with or from genetically modified organisms, like much soy meal coming from the US,” the co-op says.

“Locally grown roughage, such as grass and maize, which is by far the most important feed for cows, does meet the VLOG criteria. Before the milk may be used in products featuring the VLOG label, the cows must have been fed in conformity with the VLOG criteria for three months.”

As a result of the higher feed costs at the farms, and higher logistic and production costs, cheese with the VLOG label costs more than regular cheese. Participating dairy farmers will receive an extra $1.59/100 kgMS on top of the

FrieslandCampina guaranteed price for farm milk to compensate for the higher feed costs.

FrieslandCampina says its cheese plants in Born and Workum (the Netherlands) will be prepared for separate processing of the different milk flows.

Fonterra is pulling out of a European joint venture as part of its portfolio review following last year’s disastrous financial results.

More European dairy farmers are warming to the idea of grazing cows outdoors.