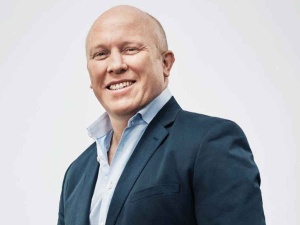 Farmers are happy with the appointment of Fraser Whineray to Fonterra’s newly created role of chief operating officer.

Whineray, chief executive of Mercury NZ, will join Fonterra early 2020. The creation of the COO role at Fonterra comes as the co-op grapples with two straight years of operating losses.

Whineray has a good track record and experience under his belt, McGiven says.

“I also hope with him accepting the position it means Fonterra still has a certain amount of credibility and respect among NZ business executives which is a positive for shareholders,” McGiven told Dairy News.

Whineray is no stranger to the dairy industry, having been a graduate of the New Zealand Dairy Board’s technical training programme. He spent time at milk processing sites and in export markets while with NZDB.

“Fraser has demonstrated he can transform organisations to achieve growth in complex environments by a focus on innovation, customers and his team.  He is motivated to contribute to New Zealand’s export success and to drive sustainability, innovation and efficiency in business – three strengths we believe can create real value.”

Whineray says he is looking forward to returning to the dairy sector and working alongside the many dedicated people at Fonterra.

“I am pleased to be able to continue in a role which contributes to New Zealand, and has strong, genuine relationships with many regional communities, Maori land trusts and local iwi across the country.”

Mercury chair Prue Flacks says the new role at Fonterra is a great opportunity for Whineray.

Fonterra's share price has rebounded since the announcement of its new strategy last month.

Three weeks ago Fonterra announced its new strategy, focussing on its NZ milk pool and saying it will ultimately pull out of overseas milk pools.

The new strategy puts greater emphasis on extracting value rather than pursuing volume. The strategy also brings the focus squarely back to New Zealand.