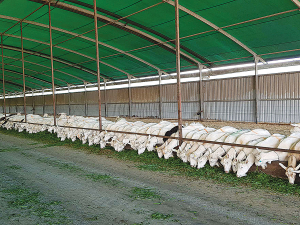 The Dairy Goat Co-operative says shareholder suppliers supported a board recommendation to reduce milk supplied to the co-op in the 2021-22 season, with the potential to do so in the 2022-23 season as part of its response strategy.

The farmer, who wished to remain anonymous, believes many goat farmers won't be able to ride the difficult times out.

DGC has slashed the milk quota for its 70 suppliers by 20% in response to a slump in sales of goat milk infant formula over the past three years.

DGC's biggest market, China, has been changing. Updated regulations governing the manufacture of infant formula in China has increased trust in domestically-produced products. This, along with a falling birth rate, have led to a drop in demand for imported infant formula. Covid-19 had only accelerated changes that had been taking place over the last two-to-three years. Sales of infant formula through the 'Daigou' channel - cross border trading by visitors and international students from China - have also dried up over the past three years.

This has left DGC with a large inventory, leaving the farmer co-op no choice but to reduce milk supply quota.

Poor sales have also impacted the payout, with one farmer claiming that the payout is down more than 30% this season.

"Unfortunately, not only have we lost 30% in payout but we have also had our milk quotas reduced by 20% for this season and probably next season," the farmer told Dairy News.

"The true slump in payout is more likely over 40% for this season and possibly could be the same for next season or even worse.

"It has been indicated that next season will be much of the same as this season. That is, only being able to send 80% of our quota on a low payout.

"The future of dairy goat farmers is extremely dire and unfortunately many won't be able to ride the difficult times out."

Dairy News understands that DGC directors received flak from farmers during a recent round of shareholder meetings.

One large dairy goat farm in the Waikato was sold recently. The former owner has put 641 Saanen breed milking goats up for sale on Trade Me.

When contacted by Dairy News, the goat owner said the payout had "crashed through the roof" after infant formula sales dropped in China.

Dairy Goat Co-operative chief executive David Hemara confirmed that, as it has done for many sectors of the economy, Covid-19 has created some challenging market and sales-channel conditions, which DGC is responding to.

Hemara confirmed that in 2021, DGC shareholder suppliers supported a board recommendation to reduce milk supplied to the co-op in the 2021-22 season, with the potential to do so in the 2022-23 season as part of its response strategy.

“The DGC board of directors are all farmers themselves and are acutely aware of the challenges and stresses that reduced milk supply can create on farm," Hemara told Dairy News.

“They also know that acting decisively is in the best interests of the co-op and its shareholder suppliers.

“We expect that as we navigate this period, the payout will, in the short to medium term, be less than the very strong historical levels which have been achieved by the co-op.

“We are confident of the role New Zealand dairy goat milk will continue to play in feeding the world.”