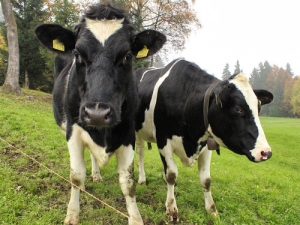 Mark and Jaime Arnold were named the 2016 Hawkes Bay/Wairarapa Share Farmers of the Year at the region's annual awards dinner held at Masterton War Memorial Stadium last night. The other major winners were Lance Graves, the region's 2016 Dairy Manager of the Year, and Nicholas Bailey, the 2016 Dairy Trainee of the Year.

The Arnolds have no farming background and first set foot on a dairy farm in 2008. Arnold, 48, managed a logging crew and Arnold, 35, was teaching.

They have been 50% sharemilking 500 cows on the Dannevirke farm owned by Mike and Sherynn Harold, and Stuart and Sandra Cordell since 2011.

"Dairying is such a supportive industry, so it is great to be a part of it."

The couple, who had entered the awards twice previously and finished runner-up last year, won $11,600 in prizes.

"From entering the dairy industry awards we know exactly what drives our profitability and how our low-input system is resilient. It has made us focus on our goals and how we can achieve them and it has helped us to highlight what we are driven by.

"We also see the benefits of networking and getting our name out there to build a good image for ourselves so that it could open up job opportunities."

Their goals are to continue farming in the Tararua district, to reduce debt and start buying equity into a dairy farm, and to achieve a healthy work and life balance.

"In later years, we want to give our four children the opportunity to grow within the industry and to buy shares into our business."

The region's Share Farmer runners-up are Carterton contract milkers, Adam and Rebecca Giddens, 27 and 25, and who won $8000 in prizes.

Entering the awards has helped the 2016 Hawkes Bay/Wairarapa Dairy Manager of the Year, Lance Graves, to grow his business – Graves Grazing.

Graves, 26, buys 100kg calves to rear and then sell as in-calf heifers. "This business is important to us in assisting us to reach our goals in the near and distant future."

Employed by Willy and Sally Bosch as a herd manager overseeing 315 cows on the Martinborough farm owned by Jenny Tucker, he won $7500 in prizes.

A qualified automotive engineer, it is only Graves second season in the industry. He is focused on operating a low cost profitable dairy business.

"What is the point of being in business if you are not making a profit? Having low operating costs allows you to make ends meet and ensure the business continues to progress into the future regardless of the payout."

The 2016 Hawkes Bay/Wairarapa Dairy Trainee of the Year, Nicholas Bailey, is hardworking and outgoing and likes to achieve positive results.

"I also like to help others to reach their potential and learn more so they can progress in their career."

The 21-year-old is assistant manager for Robert Hartley on Bryan Tucker's 950-cow Greytown farm. He won $7050 in prizes.

His short term goal is to progress to a farm manager or contract milking position while longer term he plans to go sharemilking or enter an equity partnership.

Bailey is a New Zealand Football accredited referee and oversees Wellington regional games as well as games in the national youth league. He is also heavily involved in Young Farmers.

"Entering the awards has helped me to get some new experiences, especially in the interview, and enabled me to meet new people and test my knowledge."