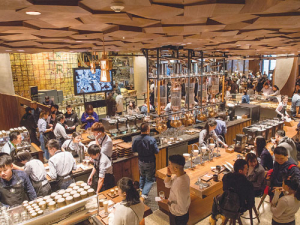 Starbucks in China gets all its dairy ingredients from Fonterra.

Rollinson, a supplier to Fonterra since its inception, was one of 39 co-op shareholders on a 28-day tour of China in June. It included a day at Fonterra’s China farms and two days at its head office in Shanghai.

Rollinson told Dairy News that the days spent at Fonterra China eye-opener. “I’d suggest Fonterra is held in very high regard overseas, especially in China with our Anchor brand; some improvement of the Fonterra image in New Zealand would be great,” he says.

Rollinson also played down concerns that Fonterra was sending too much milk to China.

“I don’t agree it is a concern... No other market generates the same value, because of the tariffs we are forced to pay. And projected volumes for the next five years with added value is huge in China.”

The touring farmers were told that Christina Zhu, the president of Fonterra Greater China, leads a team of about 350 employees.

Rollinson was impressed by the dedication and commitment of Fonterra staff in China.

“Those we met were so committed and believed in our cooperative; their work commitment and enthusiasm and long hours of work were something money cannot buy.

“It’s a culture lead by Christina and has to be seen by our Fonterra shareholders to be believed.”

“Fonterra ingredients are believed to be used in about 1000 different food items in China. We also visited a food service development centre where chefs develop new blends for customers and upskill them on Fonterra products.”

Rollinson says the shareholders tour was led by Grant and Karo Wills through Ron Mcfail Tours.