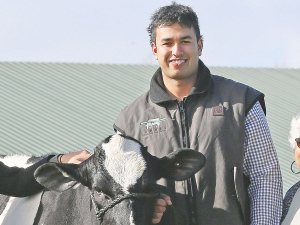 Arjun Singh says the open day planned for next year will be a dedication to his late dad.

Innovation, loss and resilience have brought the Singh family to the point where it is poised to honour its patriarch, and to give back to the farming industry through "The Legacy" sale.

The fifth generation dairy farming is well-known in the Waikato for their innovative decision to build a 250m x 40m barn [9,625m2] barn to house its 1,000-cow Lawwal Holsteins milking herd - by absorbing the best of the North American experience and applying it to their own landscape.

The freestall barn innovation was initiated by the late Aman Singh and his wife Daljit, together with their son, Arjun. It became a reality in 2018 when Calder Stewart completed the imposing structure.

The barn was fitted out by GEA Farm Technologies and no detail was left untouched. It won Silver in the 2019 New Zealand Commercial Project Awards. The herd's numbers have since moved from 600 to 1,000-head, and the herd's average production has lifted by almost 30% to this season's projected 700 kgMS per cow.

With mature cows cracking 1043 kgMS, and two-year-olds producing up to 935 kgMS, the decision has been a triumph for its owners.

Sadly, Aman did not get a chance to see the best of it. In March 2020, he passed away of a heart attack, aged 49 - leaving his family to continue what he started.

Arjun said that his father's vision was to showcase an example of "farming for the future" within a sustainable operation at Lawwal.

"He wanted an operation that would be compliant, without compromising cow comfort or great working facilities for our staff," Arjun said.

"While he worked hard, he never underestimated the importance of having a healthy lifestyle, and he encouraged everyone around him to do the same."

Aman set a great example. He was a member of Crossfit Te Rapa for six years, earning the award for the "Heart of CFTR".

As the family worked to rebuild their lives witout Aman's daily presence, guidance and expertise, their thoughts have now turned to honouring his memory.

Ready to Show and Tell

With four years behind them in the barn Arjun's family is ready to showcase the operation.

Their highest producing cow for last season was a Supersire daughter Lawwal Ssire Bailey who produced 1043kg Milk Solids (MS) and 14,350 litres as a six-year-old. Their top two-year-old was Lawwal Montross Casas who produced 943kg MS [11,990 litres]. She will sell fresh in the sale.

"Dad and I had many conversations around how we can feed our cows better.

"That we were struggling to fully feed the cows enough on grass all year round, especially in the summer," Arjun explained.

"We started looking around, and we liked the look of the freestall barns. So, Dad went to the US and saw some really good barns, and some really bad barns.

"He came back and he sent me down to the South Island to look at barns down there, and when we came back together, we knew this was what we wanted to do.

"It was definitely the right call and we'd like to also showcase the TMR (total mixed ration) system. Because TMR has worked very well for us. We grow 70-80% of the daily ration on farm, mainly maize silage and grass silage.

"This system has allowed us to increase production."

The legacy sale will sell 50-head on April 22, 2022. It will also include a farm open day and fundraiser. The family will donate 10% of its sale proceeds - to the Heart Foundation (5%) and Rural Support Trust (5%).

This is an event that has been planned to be an all about family, showcasing improved technology for the future, great cows, and living a healthy and balanced lifestyle. It is deliberately slated during the school holidays to reflect the emphasis on family.  "The whole day is dedicated to Dad," Arjun, 24, said.

"He built the legacy here at our farm and laid the platform for us. We wanted to raise funds for two charities that are close to our hearts. The success of this sale for us will be measured through helping others."

This includes the unique decision to offer the pick of its 1,000-cow milking herd.

The sale will include in-milk cows, yearlings, calves and the pick of the flush lots. There will be a mix of high production New Zealand-bred animals which carry LIC interest.