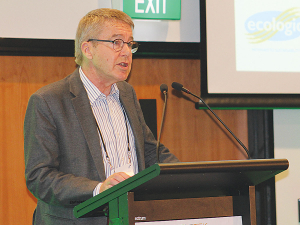 Water will be costly and difficult to fix, says Guy Salmon, executive director of the policy think-tank Ecologic and a driving force behind the Land and Water Forum.

The dairy industry itself, in a proactive move early this century, defined a series of five best-practice dairy catchments, Salmon told the ProteinTech19 conference in Auckland last week.

The catchments have been monitored, and recently published papers report on the achievements in those catchments.

“They got quite a good response from the farmers in terms of their taking up management practices, fencing off their streams, moderating their fertiliser usage, disposing of dairy shed effluent onto land rather than dumping it into waterways, using low rate effluent irrigation -- all kinds of changes were introduced in those catchments.

“Seventeen years later [we’re looking] at these studies which measure the results. The streams were pretty degraded at the beginning of this experiment and 17 years later you can’t measure any improvement in the ecological health of these streams.”

But there is one exception -- the catchment which drains into Lake Brunner, near Greymouth, West Coast. The catchment has 5m of rainfall, big flushing flows coming down the streams on average every 17 days all summer and winter and it has lots of native forests. It has only 8% of farming’s catchment and is the kind of place that is more resilient to the impact of dairy farming.

In the Waitaki catchment in South Canterbury, 100% of the farmers have fenced off their sections of the stream, planted them and switched from flood irrigation to spray irrigation. A lot of work has been done.

But it is still in the worst 25% of New Zealand catchments in respect of faecal contamination, making it unsuitable for swimming or gathering mahinga kai. Its ecological health hasn’t improved a great deal although there’s been some improvement in clarity.

“Importantly, when you talk about what you could do to make this catchment better still, it all looks pretty expensive.

“Nitrogen, which is a major contaminant in this stream, is very costly to reduce and the stream has got so choked up with silt from past activities that to restore its ecological health you would have to suck out that silt -- an expensive exercise in a stream of at least 20km.”

Looking at the catchments as a whole -- but excluding Lake Brunner -- “they don’t look good from a human health point of view, or an ecological point of view, and it is difficult to know how we can do better as long as we have this level of intensity in those catchments”.

“It seems increasingly that some de-intensification of these catchments and some diversification of land use to non-livestock land use will be an important part of the solution.”

Also important would be to introduce a ‘polluter pays’ principle into the agriculture sector “so that land uses compete with each other on a level playing field”.

Across New Zealand we have about 2.1 million hectares of better quality land suitable for horticulture, says Salmon.

“But the absence of a ‘polluter pays’ principle makes it more difficult for horticulture to get a foothold on a lot of that land where the dairy industry can freely discharge its nitrogen and contaminants into the waterways.”

And dairying can get away with paying for none of its methane emissions at the moment and in future 5% of them, he says.

“And if we can get more trees into the hill country and  more horticulture onto the class 1-3 land -- even small parts of it -- we would have a net plus scenario for rural populations and regional communities.”

Another issue is whether to use regulation or economic tools, says Salmon.

The Land and Water Forum achieved a consensus on moving away from a strictly regulatory approach and instead putting in price signals applying to the use of water, for discharges into water and for being able to trade water. These are particularly important for new entrants coming into a catchment already heavily committed to a particular land use.

But in order to put a price on water we must first settle the claims iwi have on freshwater.

The livestock industries are in the middle of a big political push to protect themselves long-term under the Zero Carbon Bill legislation, says leading environmentalist Guy Salmon.

“They do this at the expense of other New Zealanders who must face pretty tough choices about the cost of upgrading a car, the cost of all kinds of technologies they use in their house -- in home insulation and so on,” he told the ProteinTech conference in Auckland last week.

“As the pressure comes on it is going to become rather divisive between urban and rural communities as to why farmers aren’t pulling their weight.

“We need to have an ethos of ‘all hands to the pumps’ and we need, as part of that, a national land use diversification and transition plan which [imposes on] farmers not just pressure to perform better but also a clear set of tools and research information -- for them to tap into -- about what new land uses are available on their particular soils and in their climate zone.

“[Then they could] continue to live on the land, perhaps changing their business model or using [the information] to diversify into a mixture of livestock and horticulture and trees.”

Salmon says the Zero Carbon Bill is proposing “only a reduction of 10%” in methane by 2030.